Art of the 20th century continued and pushed trends of the 19th century becoming increasingly expressive, pushing the boundaries of abstraction and sometimes even leaving representation behind altogether creating non-objective art. This artistic movement of abstract expressionism was supported the theory of formalism which advocates for the idea that art doesn't have to have a subject or even a "meaning" but can be understood as a purely aesthetic object by studying the formal visual features of a work. Most artwork, however, did continue to reference and respond to social and political events, especially WWI and WWII and the rapid changes of modern life. Whereas previous art movements may have lasted decades or even centuries, art movements of the 20th century become increasingly short, localized, and individualized. Towards the end of the century and continuing today, art and artists have become more critical of power structures in the art world and in society in general, leading to the development of postmodern art with increasingly socially engaged art and theory. 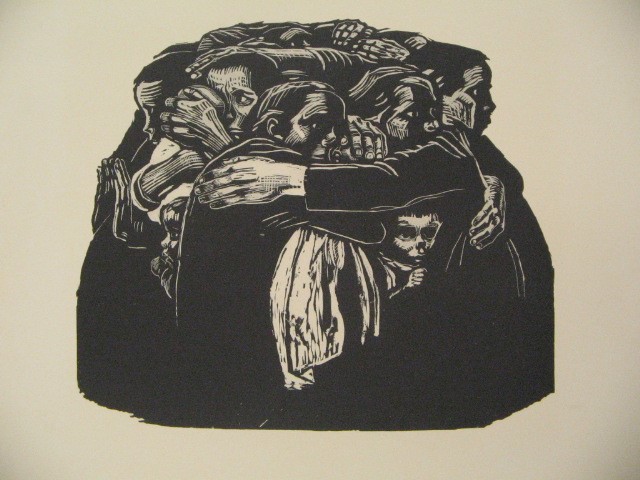 Born and raised in Prussia, Kollwitz attended the Women’s Art School in Munich in 1888 and became of the most revolutionary Expressionist artists in Germany. Reared in a liberal Socialist family, the majority of her works were devoted to images of social protest and anti-war themes. Inspired by the forceful woodcuts of Ernst Barlach, she adopted the medium in the early 1920s, producing her celebrated War cycle. The series challenged World War I propaganda depicting mothers bravely sending their children to war as a “blood sacrifice” to aid the military glories of Germany. It also commemorated the death of her son Peter, who died fighting in the conflict. Kollwitz employed powerful, unified forms in this print to signify the inviolable strength of the group of women. The mothers’ huddled bodies form a protective shield to protect their children from political violence. The vast space surrounding the figures symbolizes the isolation and despair of women left behind in the wake of war. Kollwitz’s pacifist theme of maternal love served as a potent form of protest against patriarchal ideologies of war. 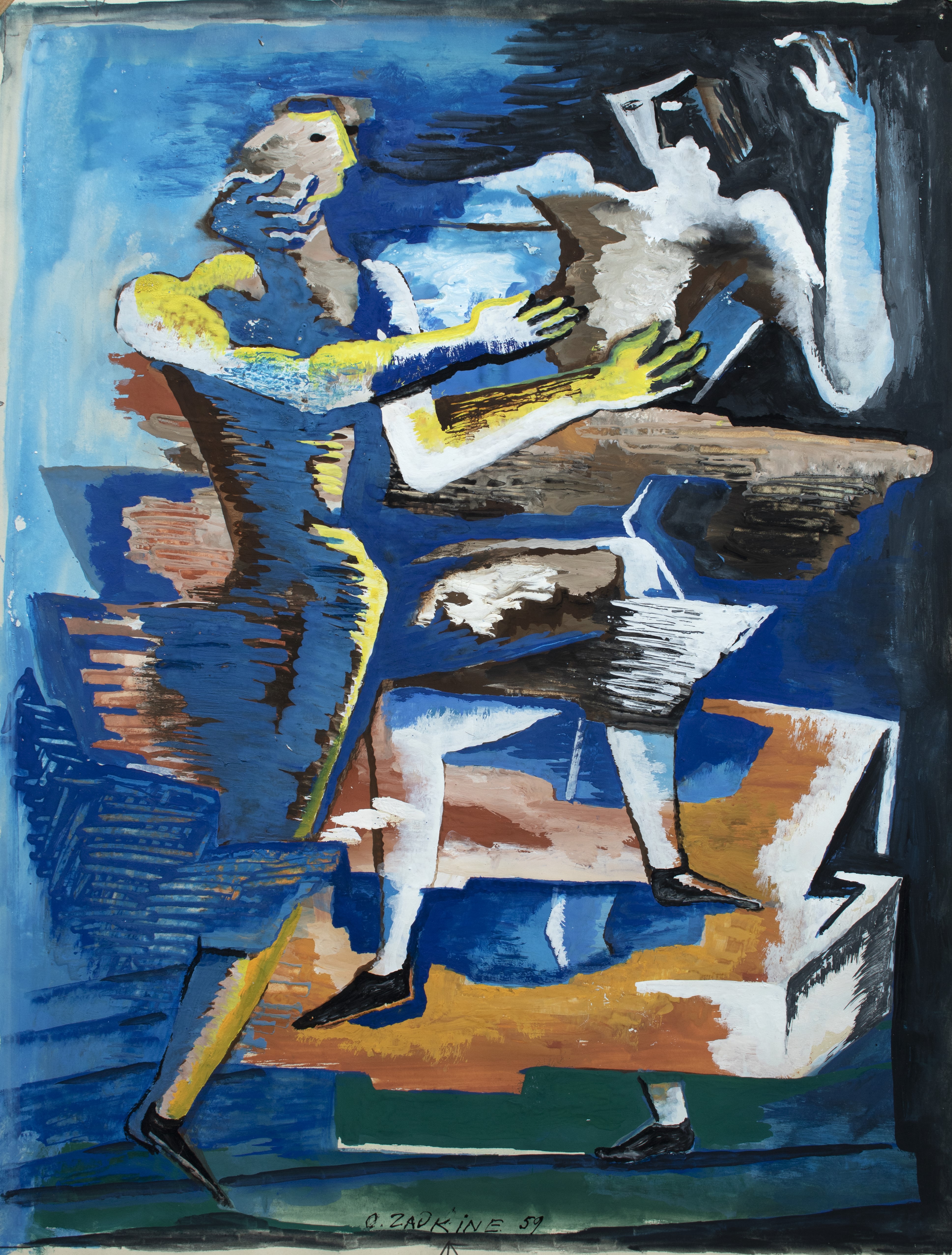 Born in Russia, Zadkine moved to Paris in 1910, studying at the École des Beaux-Arts. He was soon influenced by Cubism and developed his own avant-garde geometric style based on a synthesis of African and classical Greek art. With the onset of World War II, Zadkine fled to the United States and lived in New York City from 1940 to 1945. As a response to the harsh realities of war, his art became more discordant and expressive. While he is best-known for his modernist sculptures, he also became devoted to painting in his later career. Dancers is typical of Zadkine’s painting style in the 1950s. The vibrant colors, bold brush marks and angular planes indicate the energetic motion of the intertwined figures. In the 1910s, he had been part of a progressive creative circle that included the modernist dancer Isadora Duncan and Serge de Diaghilev, founder of the Ballets Russe. Throughout the remainder of his career, Zadkine produced works inspired by pioneering forms of musical expression and dance. In 1950,he was honored with the sculpture prize at the Venice Biennale and a major exhibit at the Tate in 1961. 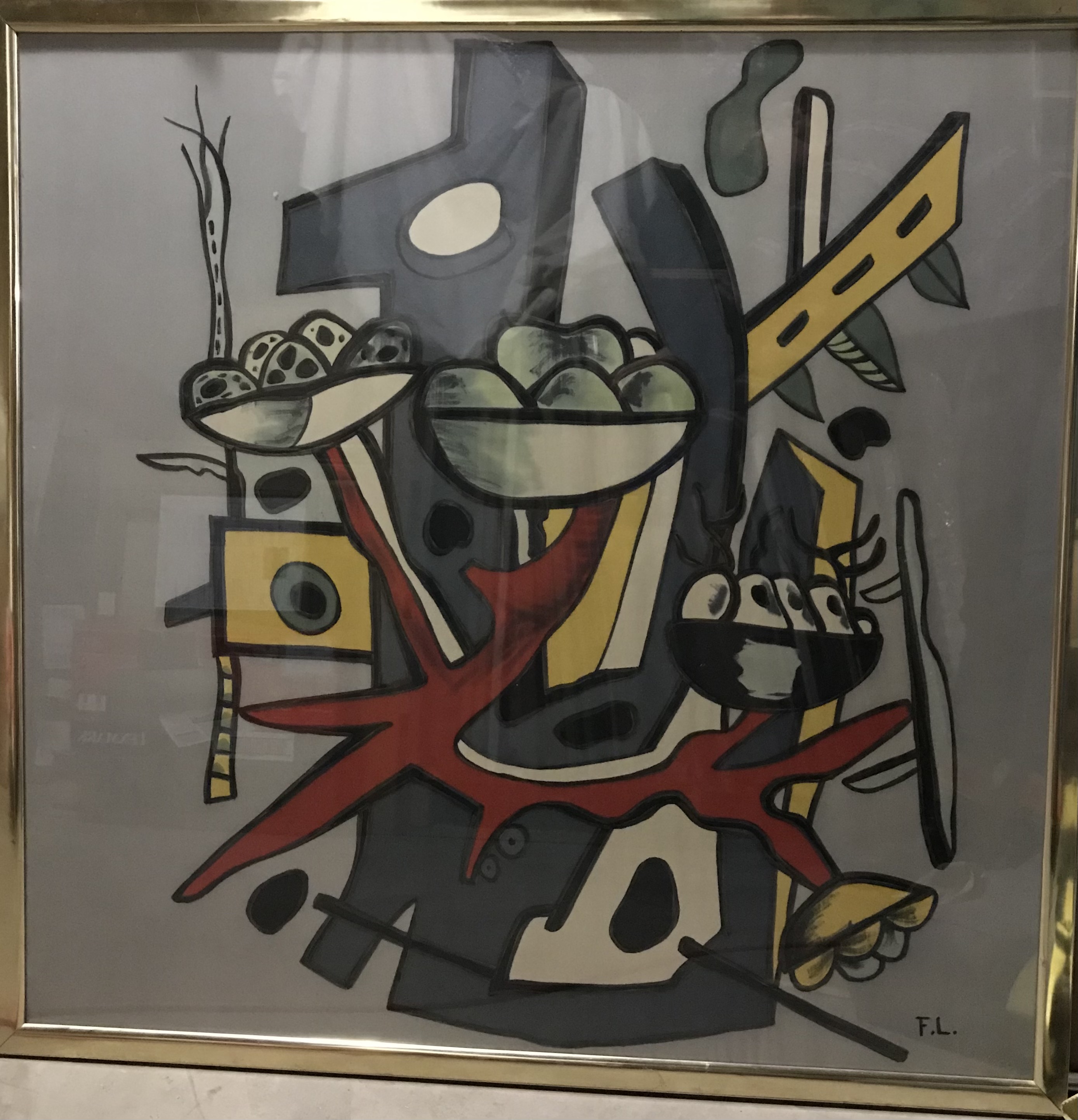 Léger hailed from Argentan, France and originally trained to be an architect. He developed an interest in fine art and pursued studies at the École des Beaux-Arts in the first years of the 20th century. An adherent of Impressionism in his early career, he adopted more radical abstract styles in the 1910s and became closely aligned with the Cubist movement. He is notable for developing a classical, decorative variant of the style known as Purism, which also reflects his strong interest in streamlined, industrial forms. As can be seen with this print, Léger’s later works became more expressive with bold curvilinear shapes and vibrant color. He did his first prints in the 1920s as book illustrations, working in lithography and woodcut and also executed a small number of intaglio prints in the 1930s. Committed to socialist art movements after World War II, he favored more populist and accessible art forms like murals and printmaking, producing a large number of lithographs and silkscreens. This print is most likely an estampes, a large edition silkscreen print based on one of the artist’s late gouaches. 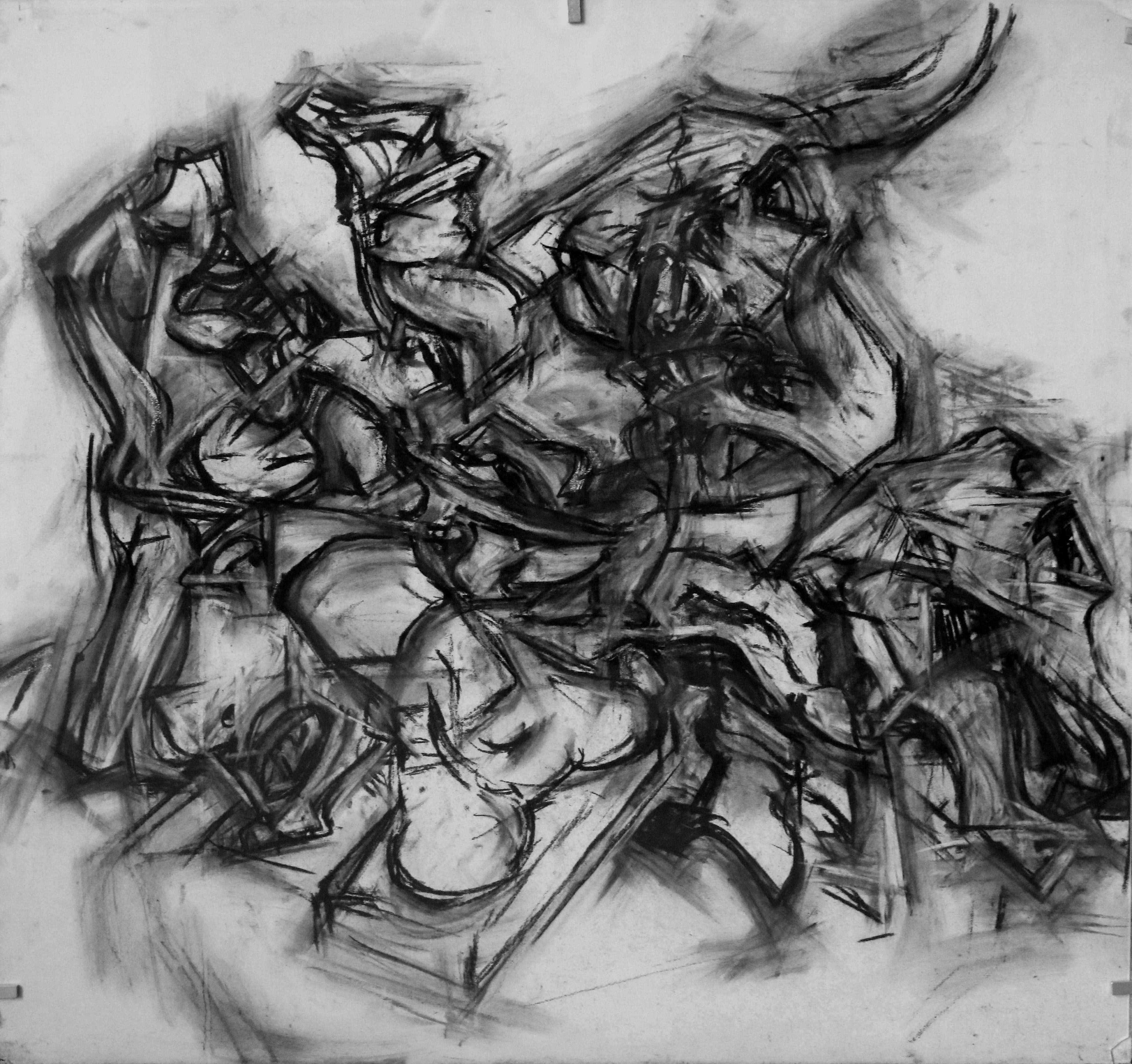 Charcoal and chalk on canvas

Matter was the daughter of the noted American modernist Arthur B. Carles, who tutored her in art. She later received formal artistic training at Bennett College and studied in New York City with Alexander Archipenko and the renowned Abstract Expressionist painter Hans Hofmann. In the late 1930s, she was a member of the American Abstract Artists group and was a mural assistant to Fernand Léger, whose work is in this exhibit [see left]. During the forties, she was one of the few female artists included in the Abstract Expressionist movement. In 1964, she founded the New York Studio School of Drawing, Painting and Sculpture, which still exists as a vital artistic center and is affiliated with the Knox College Studio Art program. Matter considered drawing an essential artistic activity on par with painting. In the late 1970s, she began an ambitious series of black and white still life drawings that often contain cow skulls set within piles of fabric, producing a dynamic all-over pattern of folds. Executed with layers of forceful marks, these abstracted forms are defined through a tense, alternating structure of flattened planes. 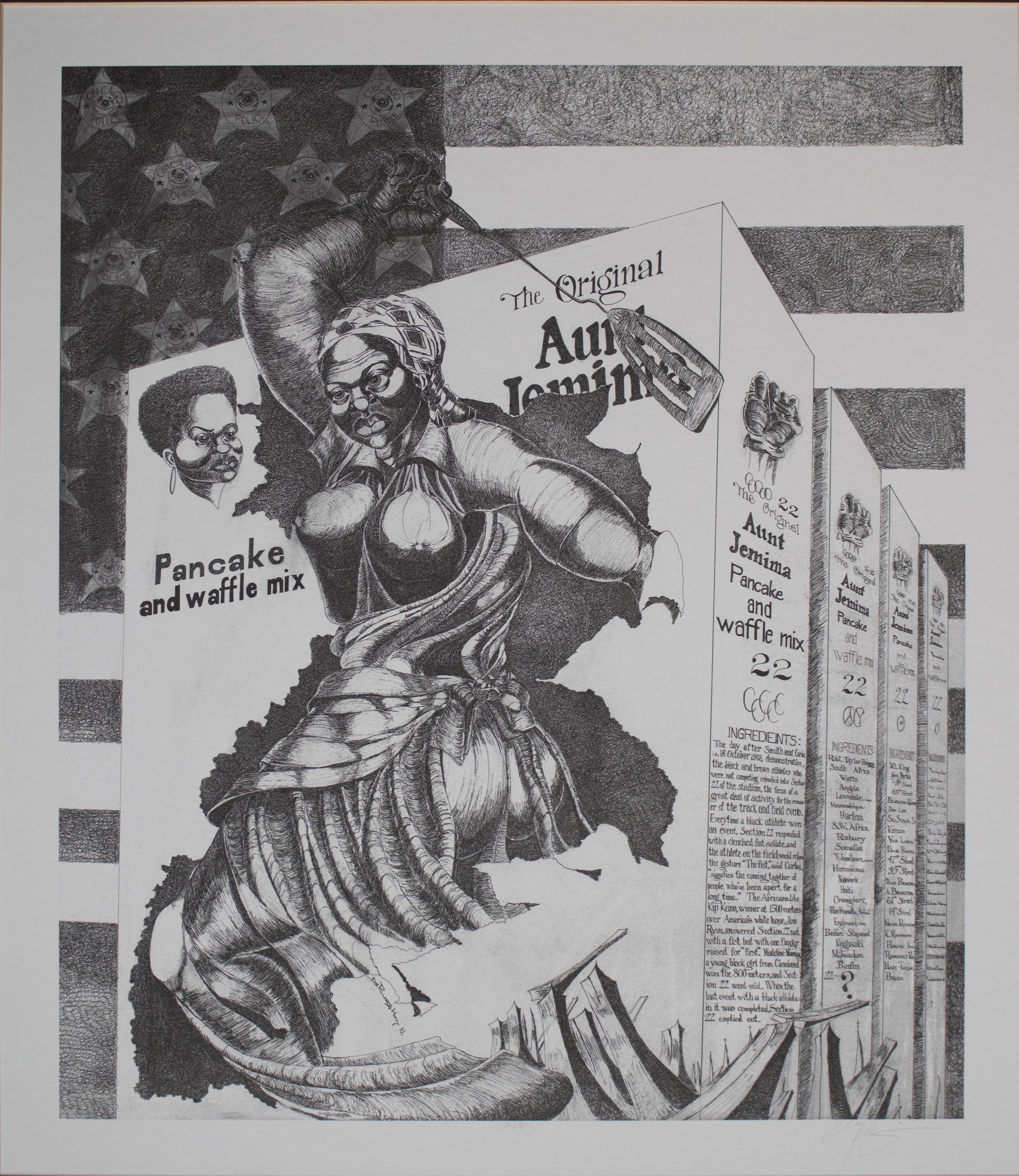 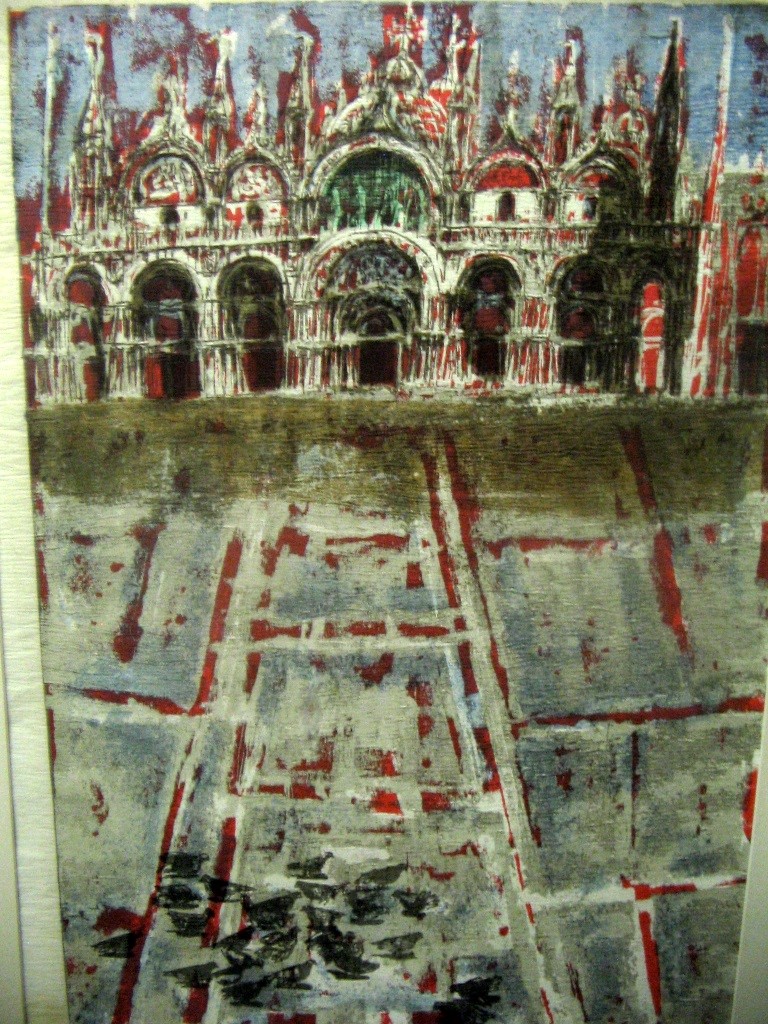 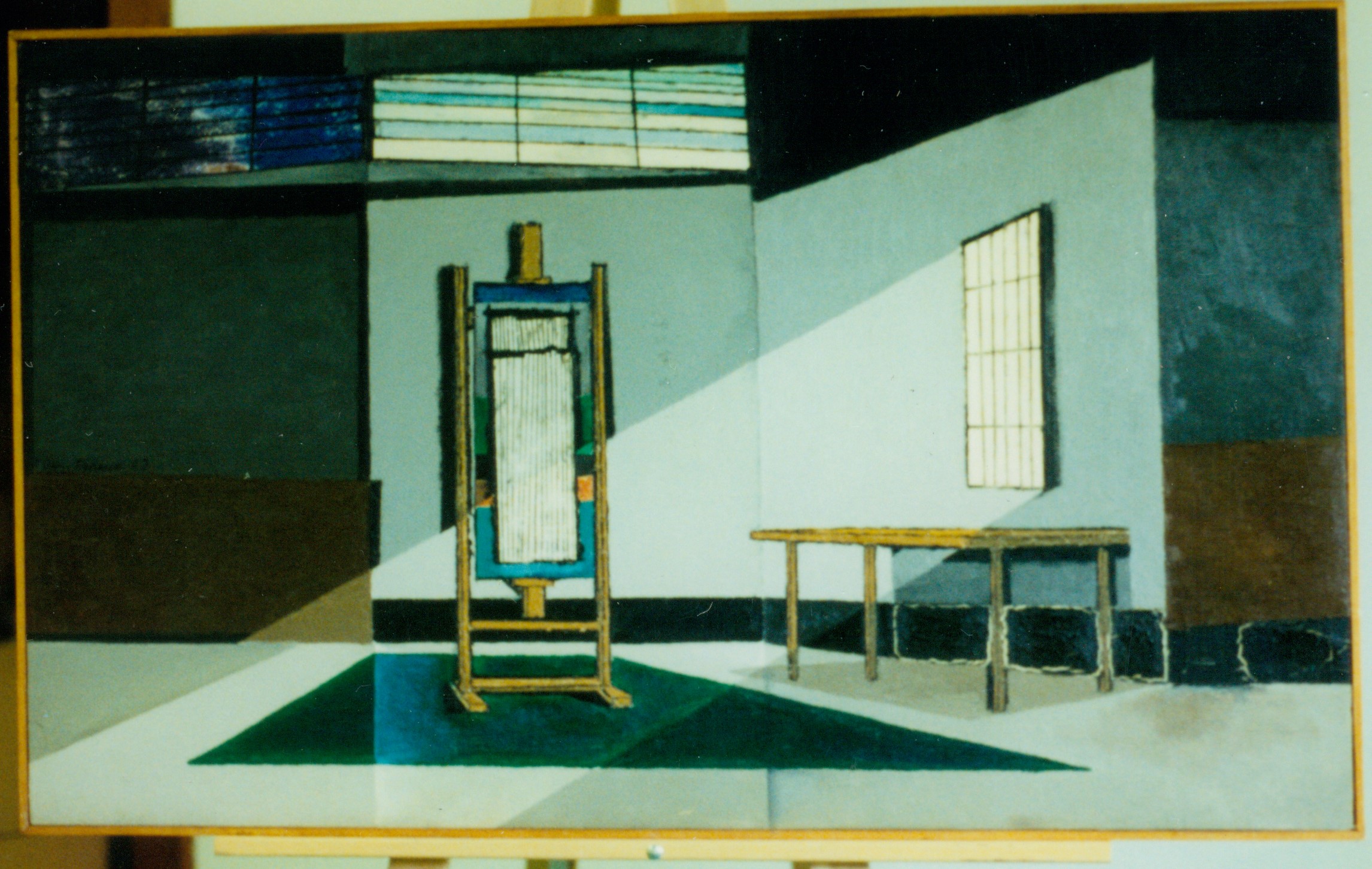 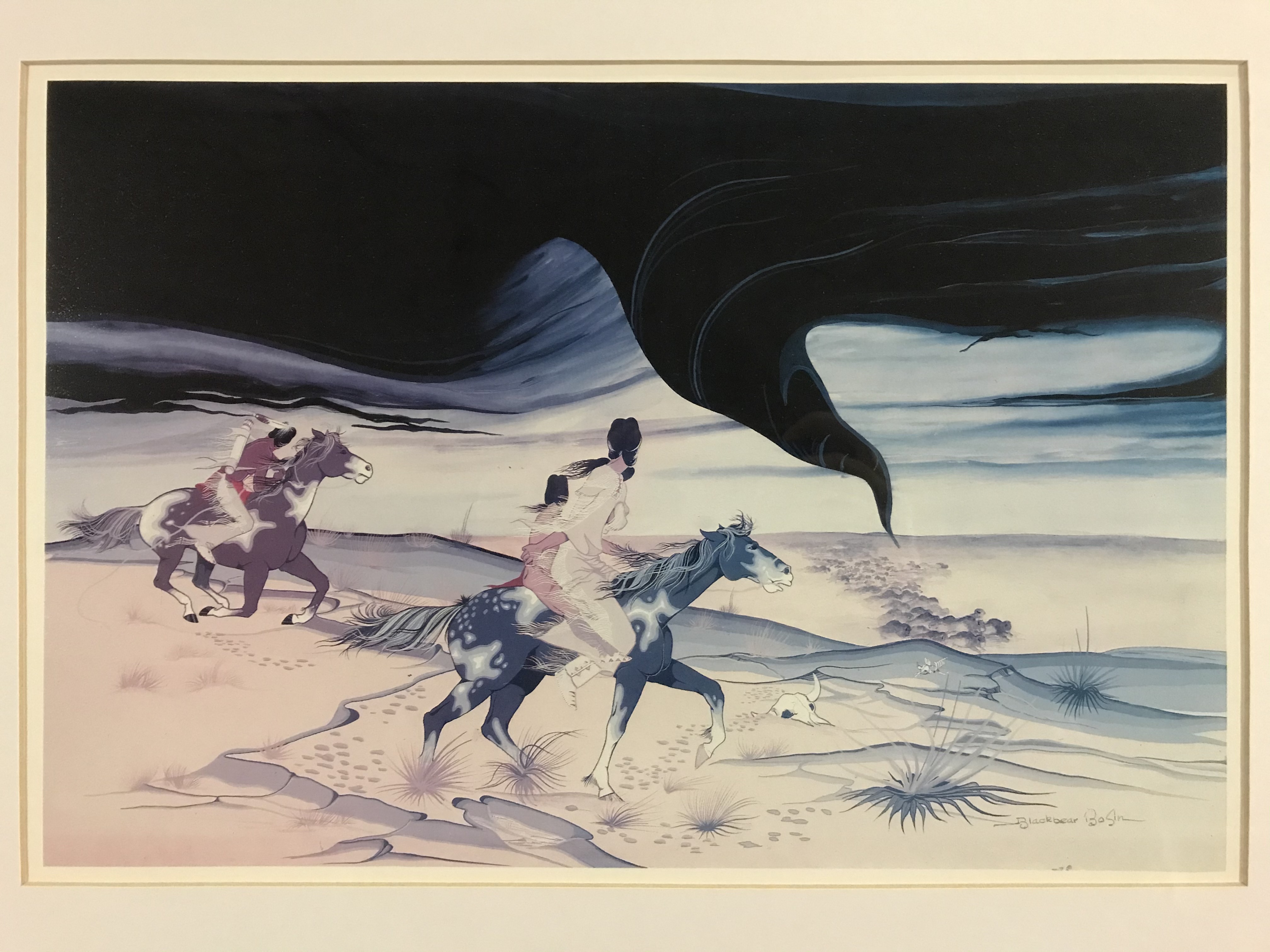 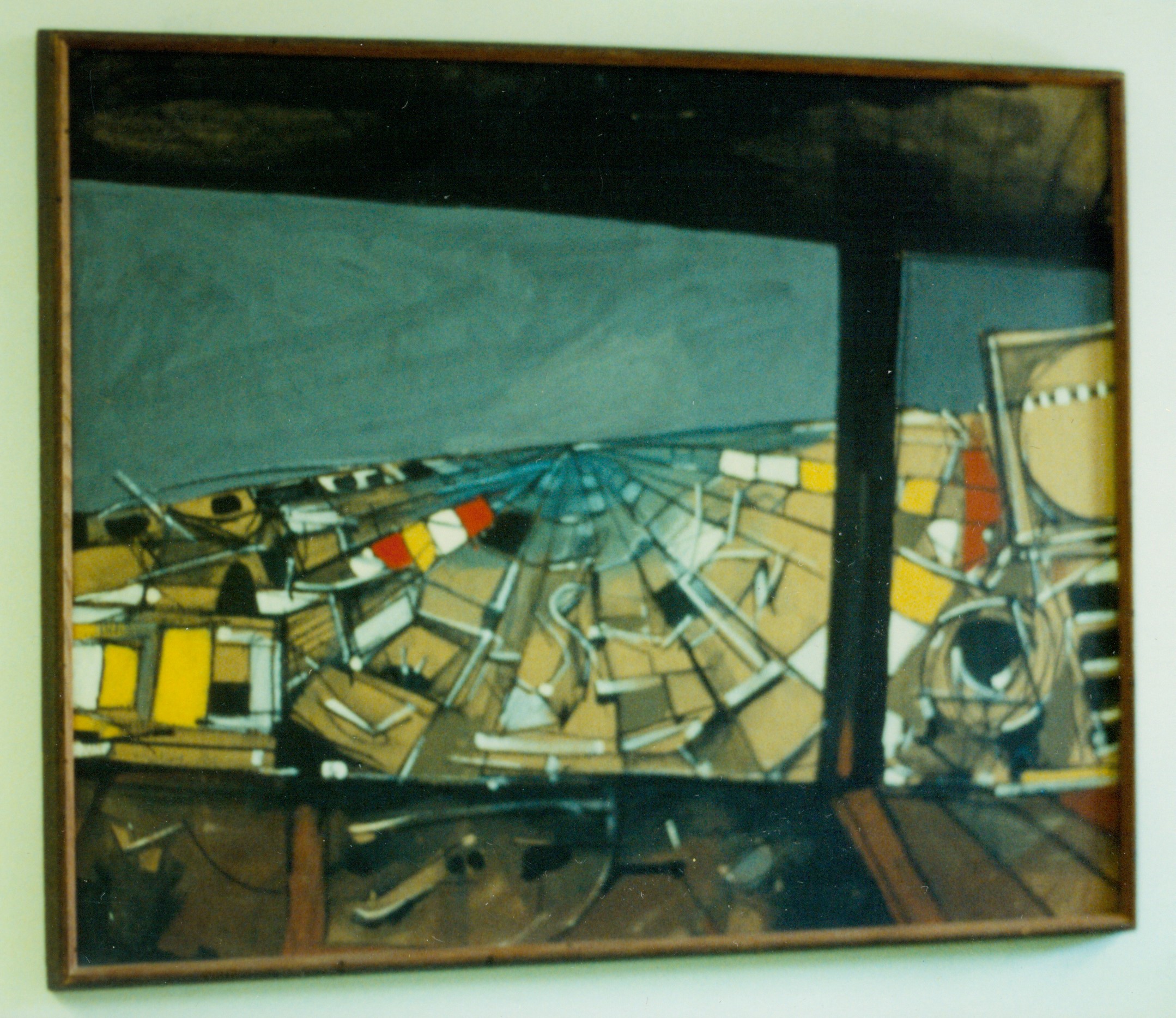 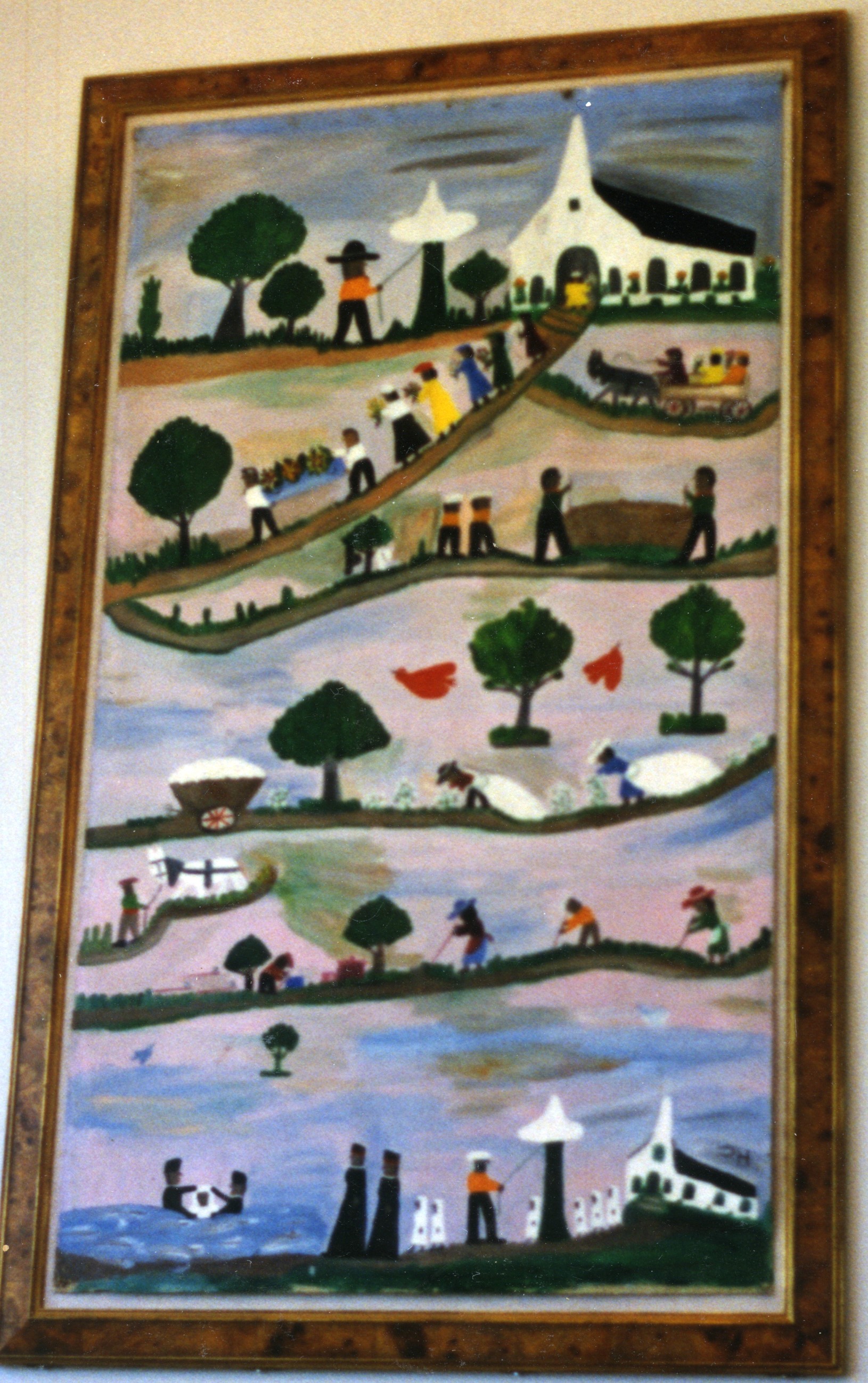 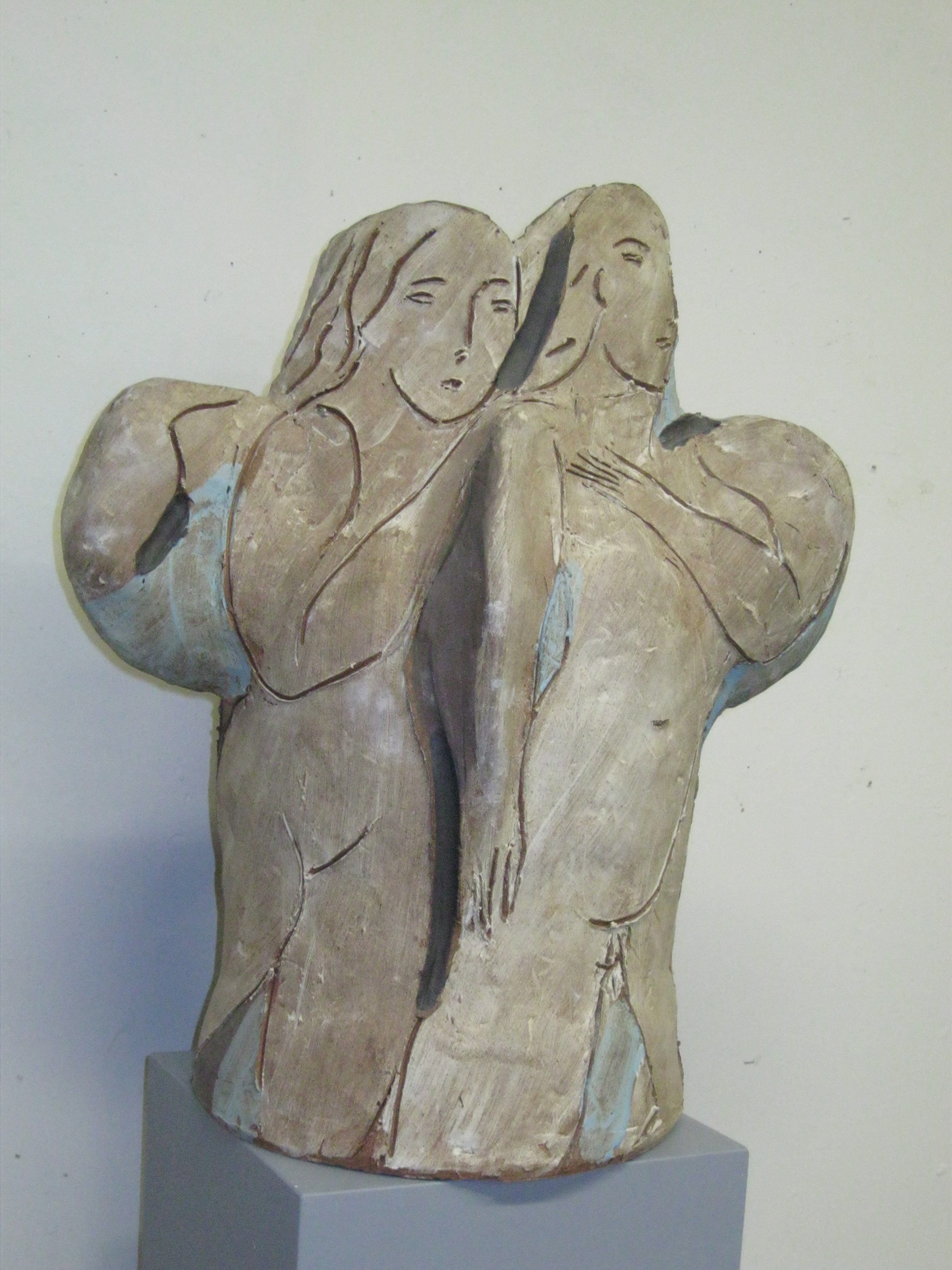 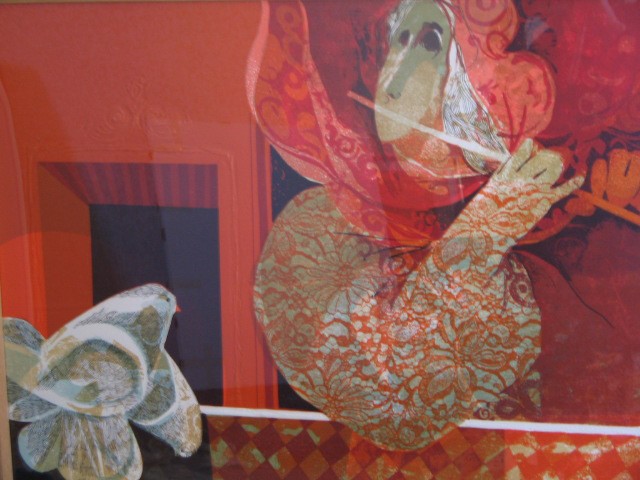 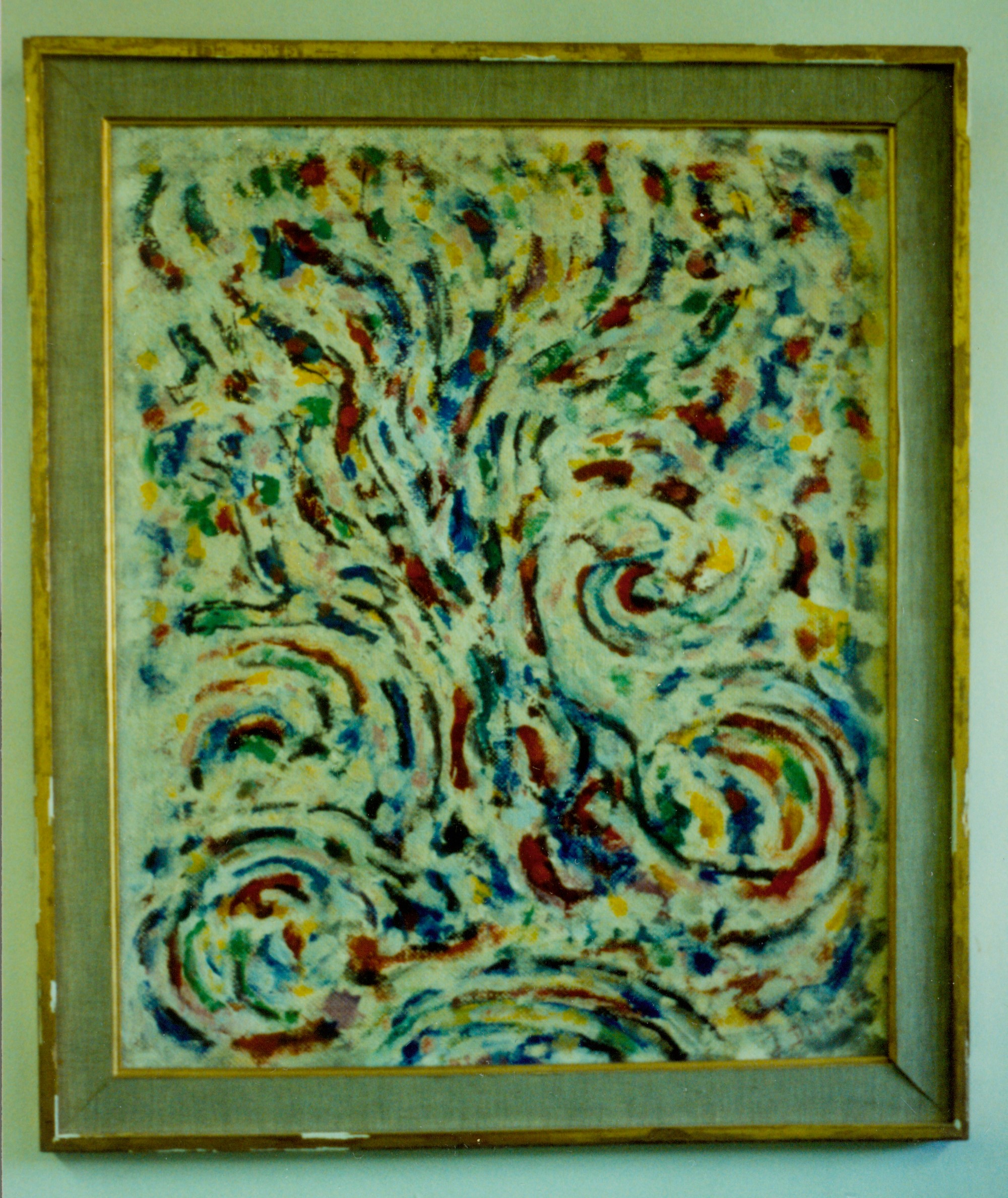