19th century art includes a variety of movements that developed in response to one another. Romanticism's dramatic compositions, mystical subject matter and interest in the internal emotional states of individuals rejected the earlier Neoclassical style was characterized by stable compositions and restrained classical subject matter. Romanticism is followed by Realism which rejected the spiritual escapism of romanticism and sought to depict the world and human experiences as they were. This idea of presenting exactly what the artist perceives gave rise to Impressionism which was then followed by Post-Impressionism which rejected the empiricism of Impressionism for a more expressive style. American art largely mirrored trends developed in Europe such as the Romanticism-inspired Hudson River School of landscape painting and later the development of Tonalism that was informed by French realist painting. Knox has a strong collection of 19th century artworks with representative works from many of the major art movements. 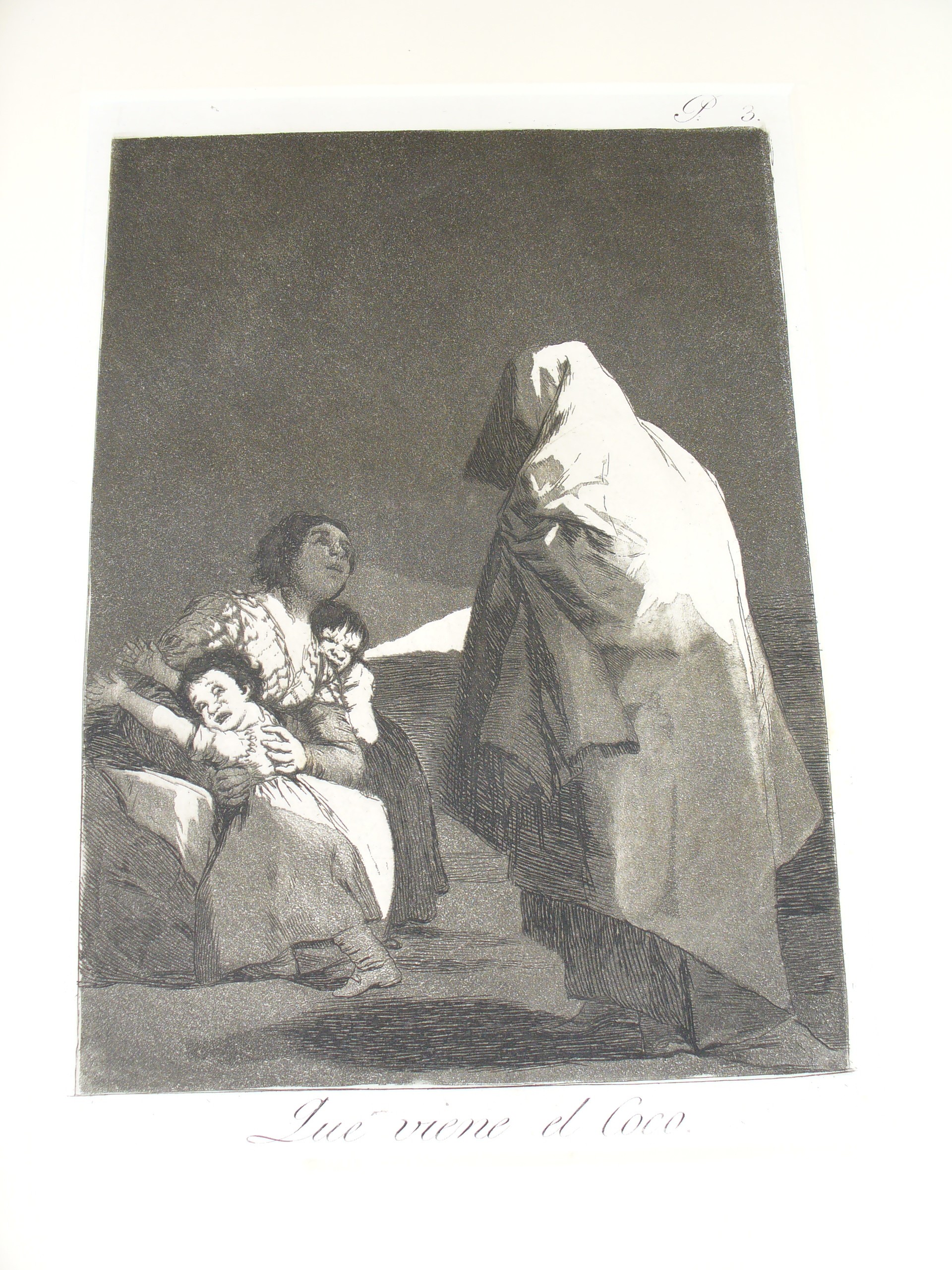 Goya was a leading Spanish Romantic artist, who served as court painter to Charles IV. Although he was a masterful painter of portraits and genre scenes, Goya also distinguished himself as a prolific and experimental printmaker. The Los Caprichos series contains eighty prints and is regarded as a satirical Enlightenment critique of the foibles, corrupt manners and conservative ignorance of Spanish society. This print depicts a mother and her children cowering in fright at the sight of the mythical figure of the bogeyman. It condemns parents for attempting to control their children’s behavior by instilling irrational fear in superstitious beliefs. As part of its moralizing theme, it may also allude to women forcing their children to bed with tales of the bogeyman in order to steal time with their illicit lovers. Goya was one of the first printmakers to exploit more modern and expressive tonal techniques, employing dense hatching and aquatint to create a menacing shadowed setting for the supernatural encounter. 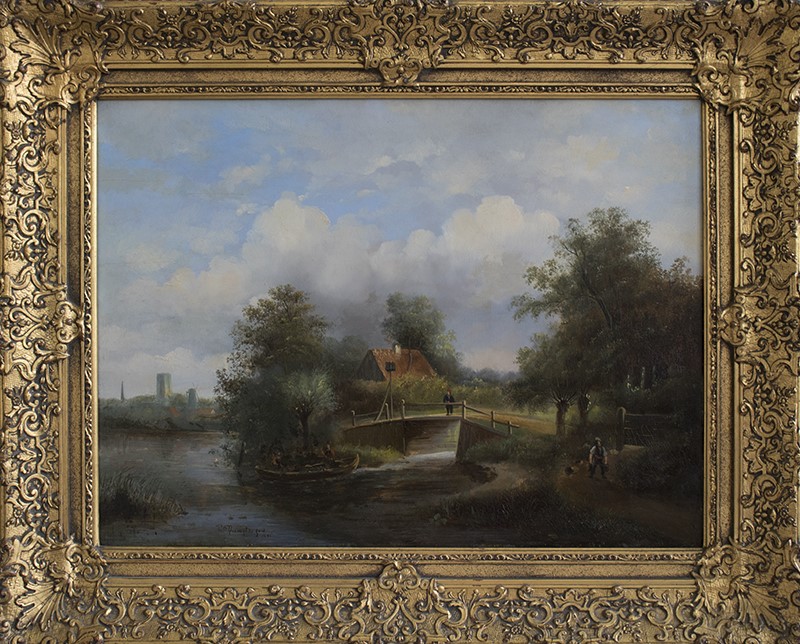 A Scottish painter raised in Edinburgh, Nasmyth was the eldest child of the landscapist Alexander Nasmyth, who trained him in the rudiments of art. During his youth, Nasmyth suffered an injury to his right hand and trained himself to draw and paint left-handed. He moved to London in the early 1800s to establish his artistic practice and specialized in rural landscape views depicting his native Scotland. He was strongly influenced by Dutch Baroque landscape traditions, particularly the paintings of Meindert Hobbema and Jacob van Ruysdael, who is represented by a print in this exhibit [see 17th century page]. Dutch Baroque traits can be seen in the casual asymmetric design of the rustic landscape view and the expressive patterning of light and dark tones. Despite his emulation of Dutch masters, Nasmyth was devoted to a direct study of nature and environmental conditions and even devised a portable tent for painting outdoors in inclement weather. Although he lacked strong artistic patronage during his career, Nasmyth is recognized as a leading figure in the early British School of empirical landscape painting. 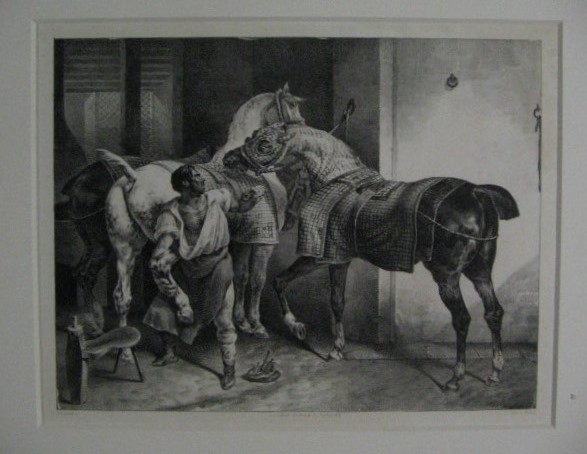 Géricault was part of the first generation of French Romantic artists. While his major work is the monumental painting Raft of the Medusa (1819), he also gained fame for his innovative lithographs. His strong interest in equine subjects can be traced to his training with Carle Vernet, who specialized in horse portraits. In the 1810s, Géricault was devoted to dramatic paintings of mounted officers and classical horse races. He returned to equine subjects with his masterful lithographs of 1821 known as La Série Anglais, which included genre scenes of farriers and various horse breeds. Gericault’s lithographs were extremely popular with the French public and in 1822 the print firm Gihaut Fréres commissioned the series Études de chevaux d’après nature, which repeated the most striking horse images from La Série Anglais. This lithograph is the mirror image of The English Farrier from the earlier series, yet the artist altered the background and removed the second figure. In his prints, Gericault’s contemplative visual study of quotidian life and labor anticipated the radical Realist trend of the 1850s. 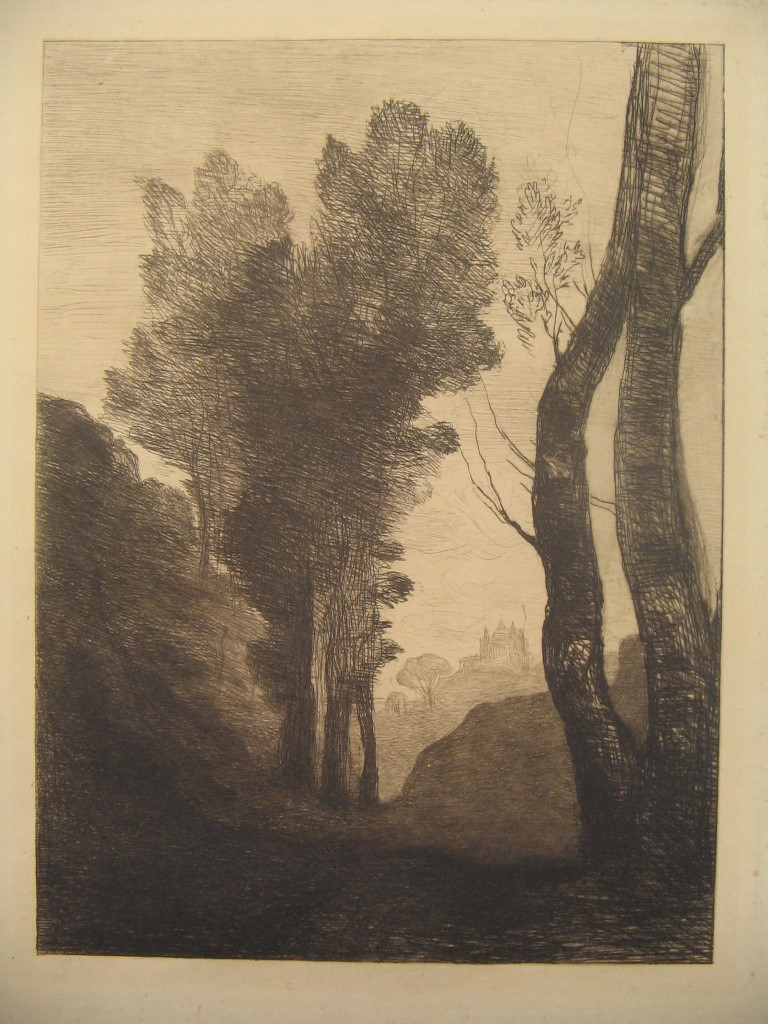 While best known for his paintings, Jean-Baptiste-Camille Corot was a prolific printmaker as well. Corot is recognized for the importance of his works as anticipators and influencers of the later impressionist movement. Corot often worked outside from nature (plein air) and developed a loose brushstroke in his paintings and a soft feathery touch visible in his prints. This print from Corot's later period depicts a road and landscape in Rome that he encountered on his many travels around Italy. Corot uses atmospheric perspective (depicting far away objects lighter and less defined) to create deep receding space, and his use of a variety of light and dark tones creates a unique light and situates the trees firmly within the deep space. These softer shapes are defined by light and shadow rather than line, creating an atmospheric effect that was hugely influential for Impressionists. He was so revered that Claude Monet remarked in 1897 that, "there is only one artist here - Corot. We are nothing to him, nothing." 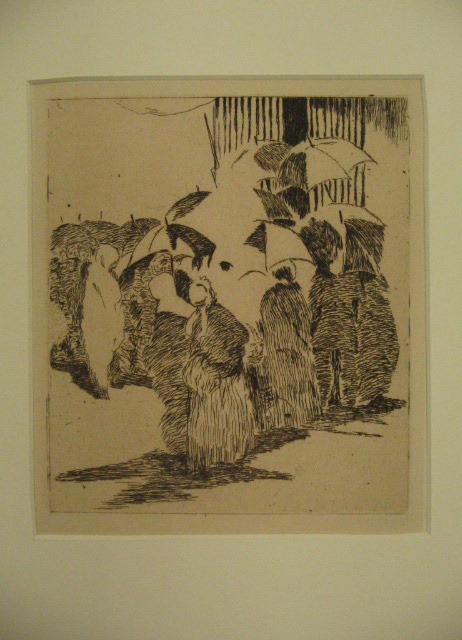 Line in Front of the Butcher Shop (Siege of Paris)

A pioneering artist within the Realist movement of the 19th century, Manet was also pivotal in the development of French Impressionism. Most noted for his radical paintings of modern urban life, he is less well-known for his innovative prints, which are relatively rare. Manet’s involvement with printmaking was intermittent, concentrated mainly in the 1860s. The artist’s prints were largely done as graphic variations on his paintings. However, this etching is one of his few original essays in the medium and is considered his masterpiece in printmaking. The technique and composition are extremely radical and may have been influenced by the aesthetics of Japanese ukiyo-e prints. The figures and shapes of the umbrellas are indicated through broad contrasting patterns of rough lines and stark blank areas of paper. The print documents Manet’s experience of the Siege of Paris from 1870-71, which led to French defeat during the Franco-Prussian War. Reflecting the artist’s leftwing political sympathies, it depicts the plight of working-class Parisians, who are desperately queuing for food at a butcher shop. 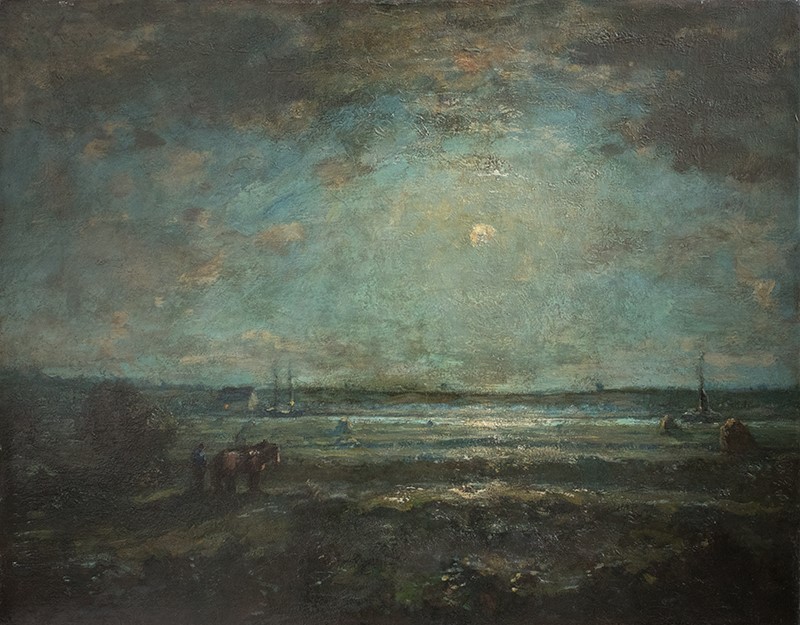 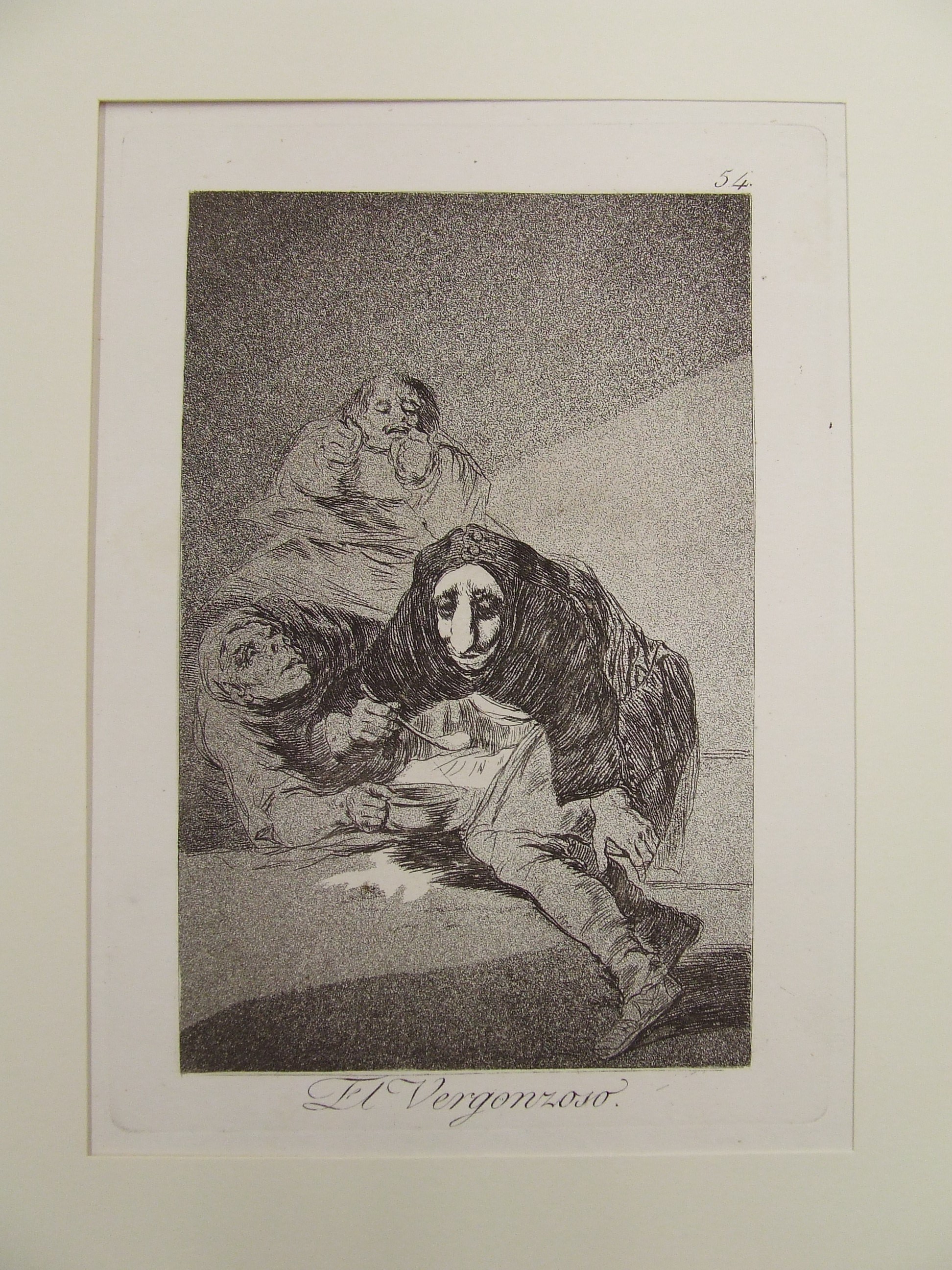 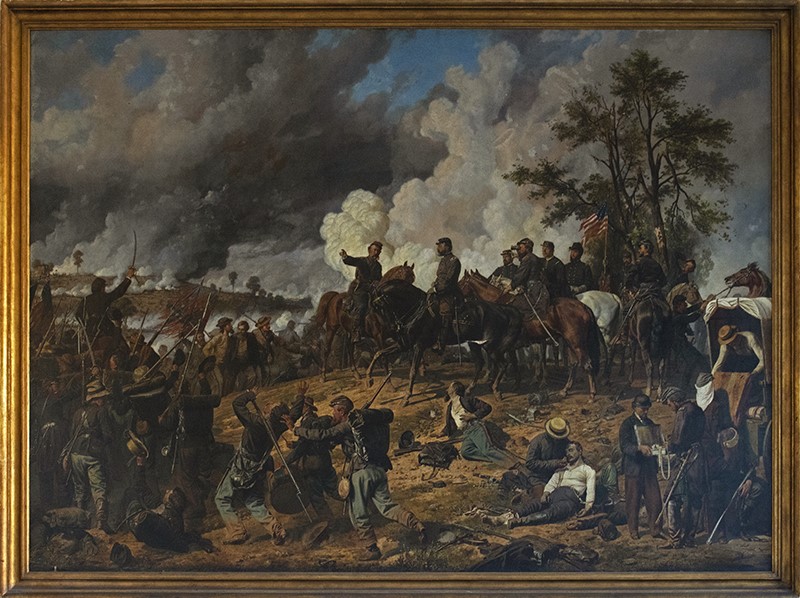 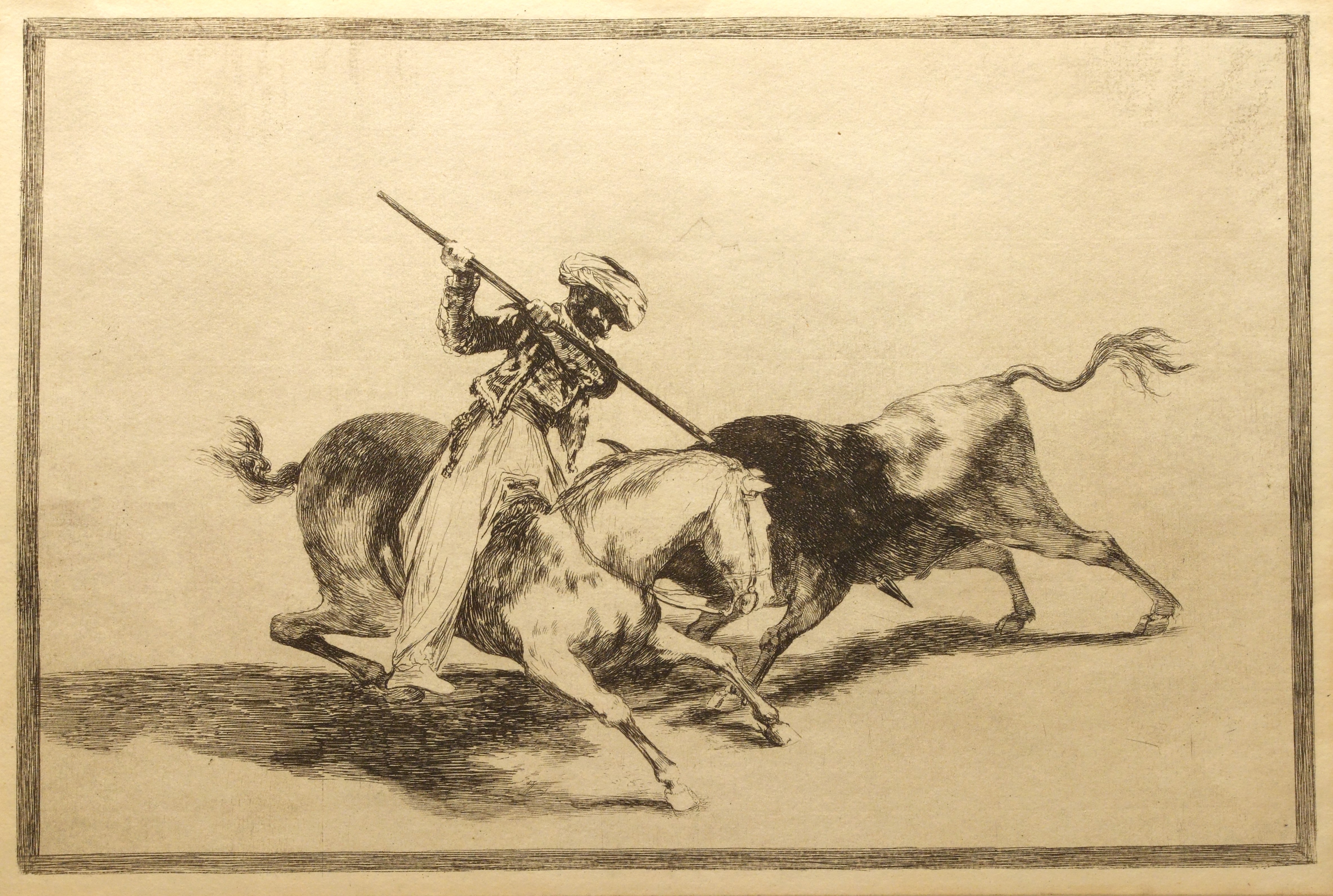 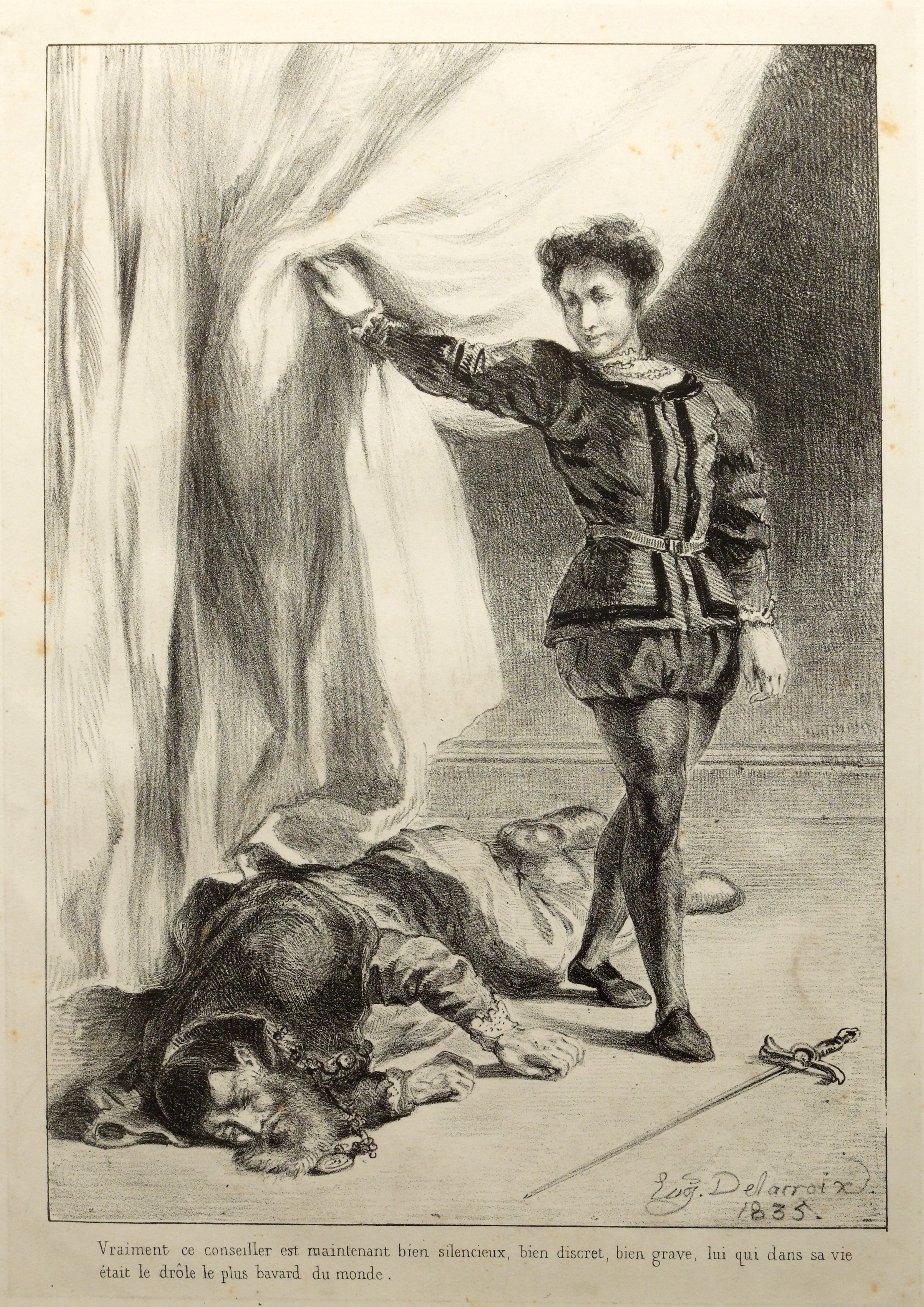 Hamlet and the Corpse of Polonius 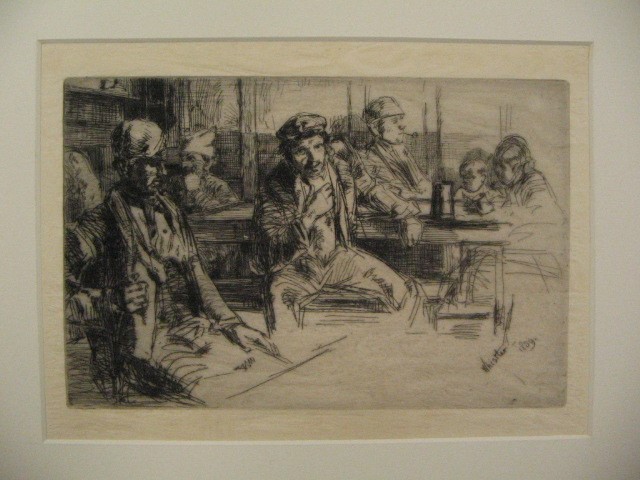 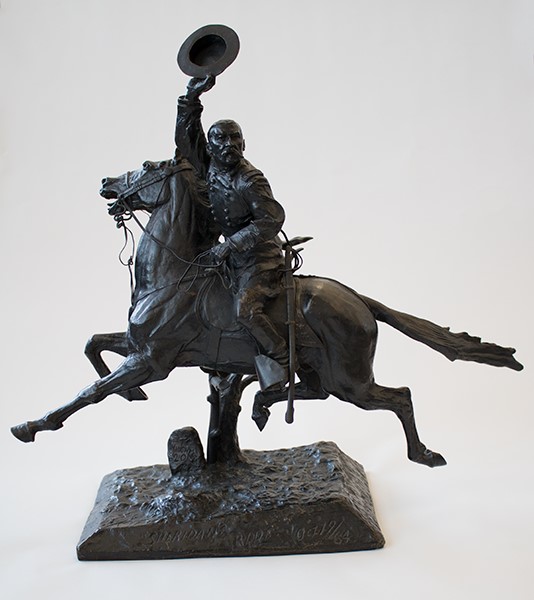