Art in 17th century Europe was overarchingly dominated by the Baroque style. Originating in Italy, the style spread throughout Europe as each country and region adapted the style. In general, the Baroque style is dramatic - utilizing dynamic diagonals, energetic movement, and expressive use of light and shadow. 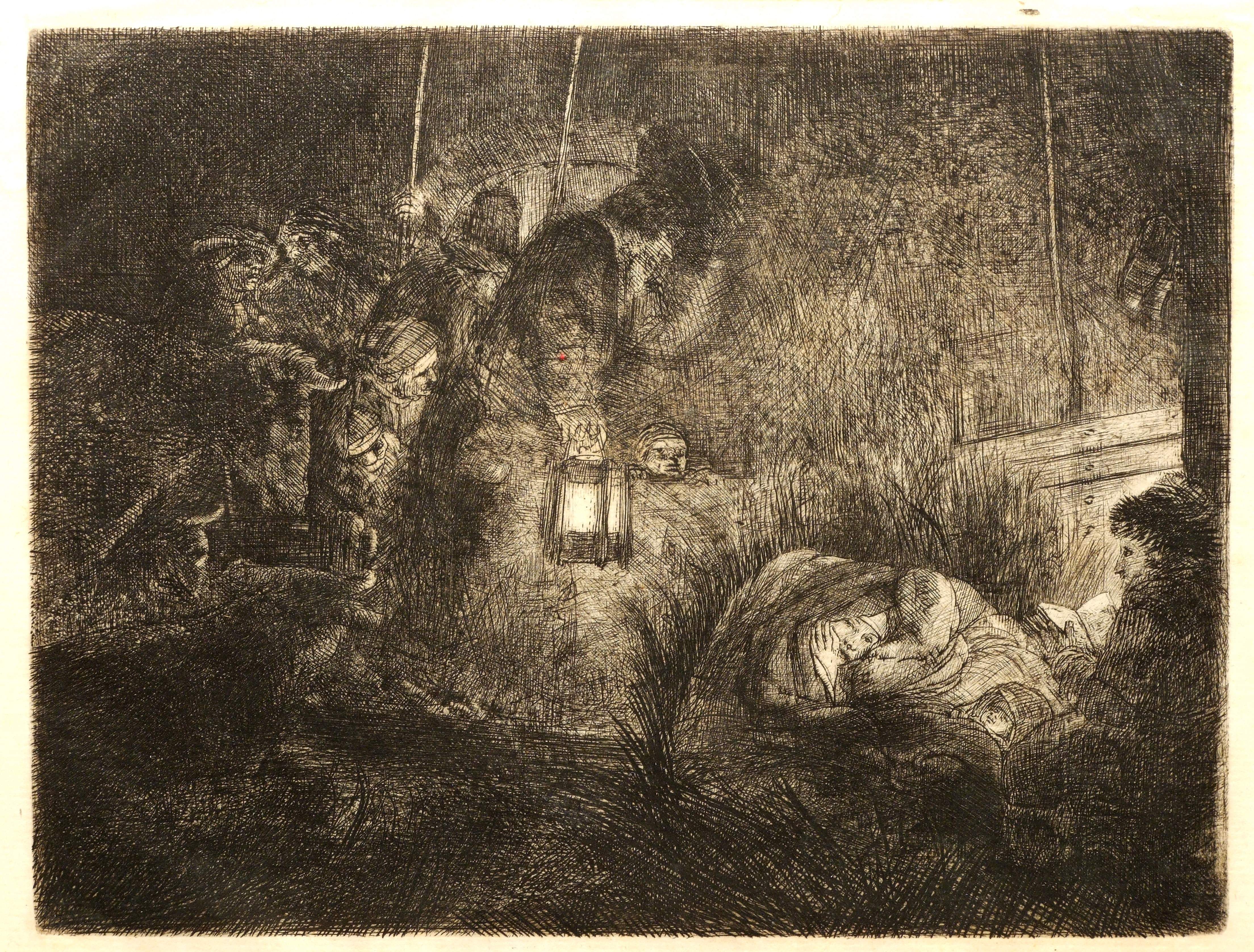 Adoration of the Shepherds

The leading Dutch Baroque master, Rembrandt was a prolific and innovative artist who excelled in both painting and printmaking. Born and raised in Leiden, he settled in Amsterdam in 1631 and established a flourishing studio practice. He produced prints throughout much of his career and was instrumental in transforming etching from a reproductive technique to an expressive, singular art form. Developing a loose, energetic style, he experimented with a variety of linear and tonal effects and often did extensive revisions of an image.

In this inventive print, Rembrandt presents the theme of the adoration as a nocturnal scene. He relied on drypoint to create rich tones that are further darkened by deeply etched lines, creating a sense of intimacy and spiritual mystery. A man carrying a single lantern is followed by a group of people peering with curiosity on the humble scene. The diversity of figure types and ages symbolizes the universal significance of Christ’s birth. The depiction of Joseph reading may be a theological reference to him as a learned man involved in the spiritual education of Christ. 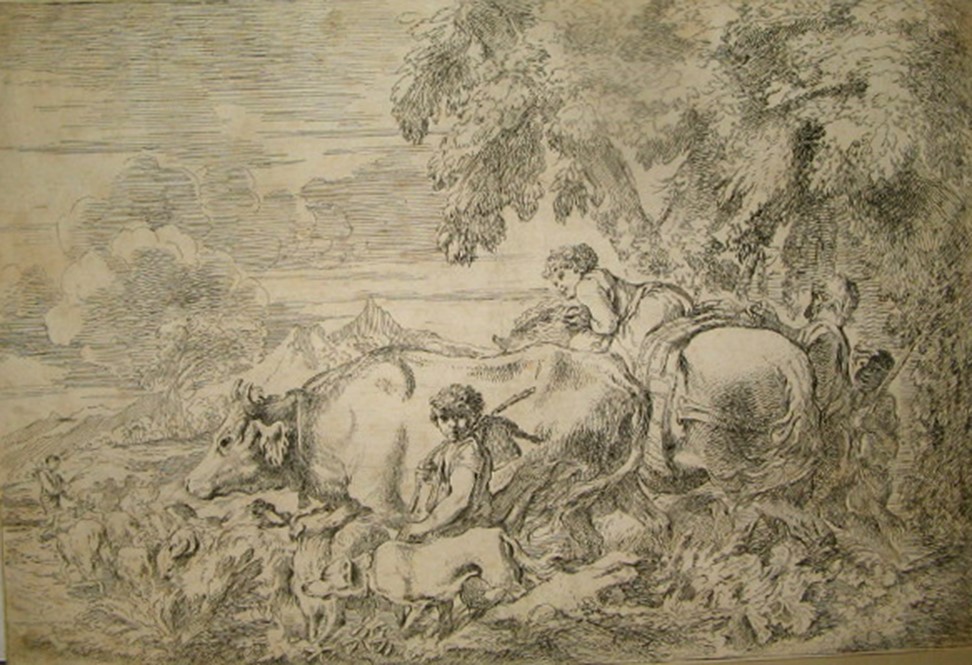 This pastoral scene by the Genoese artist Giovanni Benedetti Castiglione exhibits many of the traits of the Italian Baroque style. The asymmetrical composition along a diagonal line creates dramatic tension that is a hallmark of Baroque art and contrasts with the stable symmetrical compositions of the earlier Renaissance style. The animals and figures in the scene are captured in action, a motion that is matched and heightened by the billowing vegetation of the landscape. 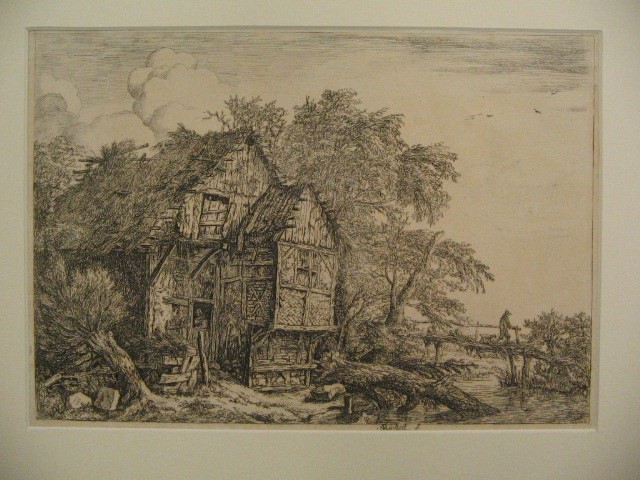 Born in Haarlem, Ruisdael had been raised and trained in a family of landscapists and was admitted to the artist guild of St. Luke at the age of eighteen. In 1657, he moved to Amsterdam, where there was a prosperous market for painted landscapes. He primarily specialized in panoramic views of the Dutch countryside, which reflected nationalistic pride in the beauty and agricultural productivity of the Netherlands. Although Ruisdael is credited with only producing thirteen etchings, these works display a high level of skill in mastering the technical intricacies of the medium. The Little Bridge is part of a set of four landscape views that are regarded as his most important prints. This picturesque scene of a rustic cottage may have been observed by the artist on a journey to the border between Holland and Westphalia, as the building is characteristic of vernacular architecture in this region. It reflects Ruisdael’s distinctive ability to render an accurate, vibrant study of nature, as he used an inventive array of marks to achieve the multiple effects of sparkling sunlight, surface textures and the movement of foliage. 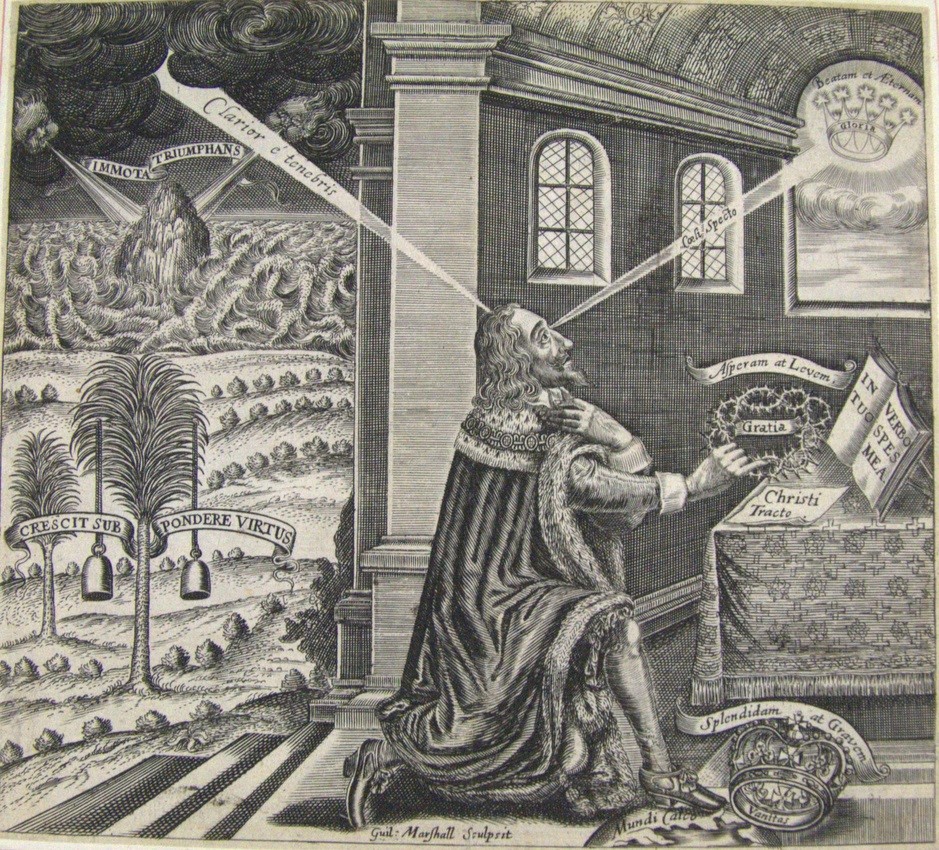 This fascinating print was made by William Marshall as the frontispiece for the book Eikon Basilike (Greek: “The Royal Portrait”) written by King Charles I in the days before his 1649 execution. Marshall uses dense symbolic imagery with accompanying Latin captions so that the message of Charles I as a Christian martyr can be read without even having to read the book it accompanies. Charles is depicted in the center of the composition receiving a beam of enlightenment in the darkness as he kneels in a barrel vaulted room. His status is signified by his ermine cloak and the earthly crown of England reading ‘vanity’ and ‘splendid and heavy’ that is discarded at his feet. Instead of earthly power, he reaches for the crown of thorns and looks to the heavens and the “blessed and eternal” crown of heavenly “glory.” In the landscape, the rock reads ‘Unmoved, Triumphant’ signifying Charles’s steadfast devotion and the weighted palm tree describes how Charles’ ‘virtue grows beneath weights.’ This combination of symbolic imagery with captions comes out of the tradition of Emblem books which used allegorical illustrations, captions, and explanatory texts to facilitate the viewer’s contemplation of the connections between text and image, often to reach a moral conclusion. 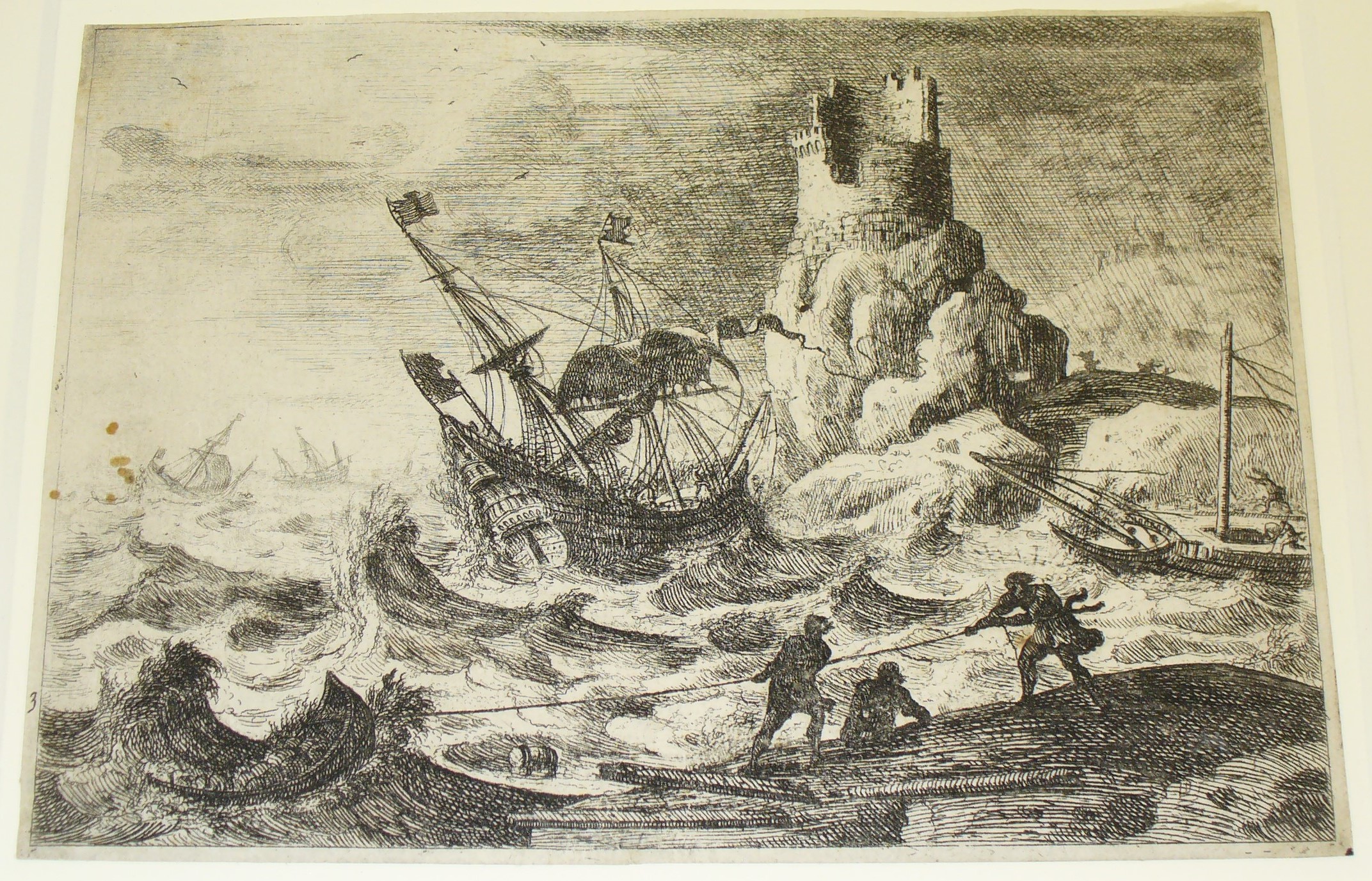 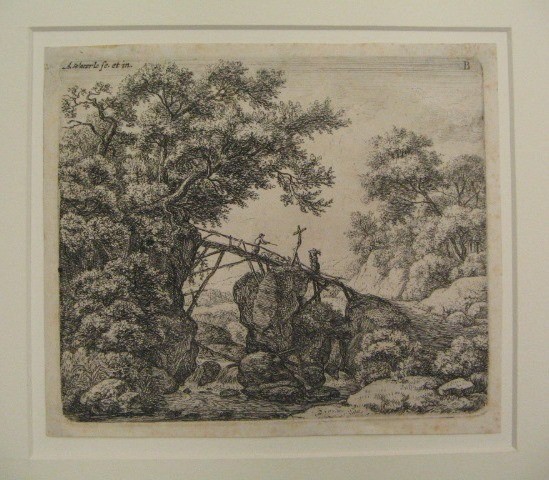 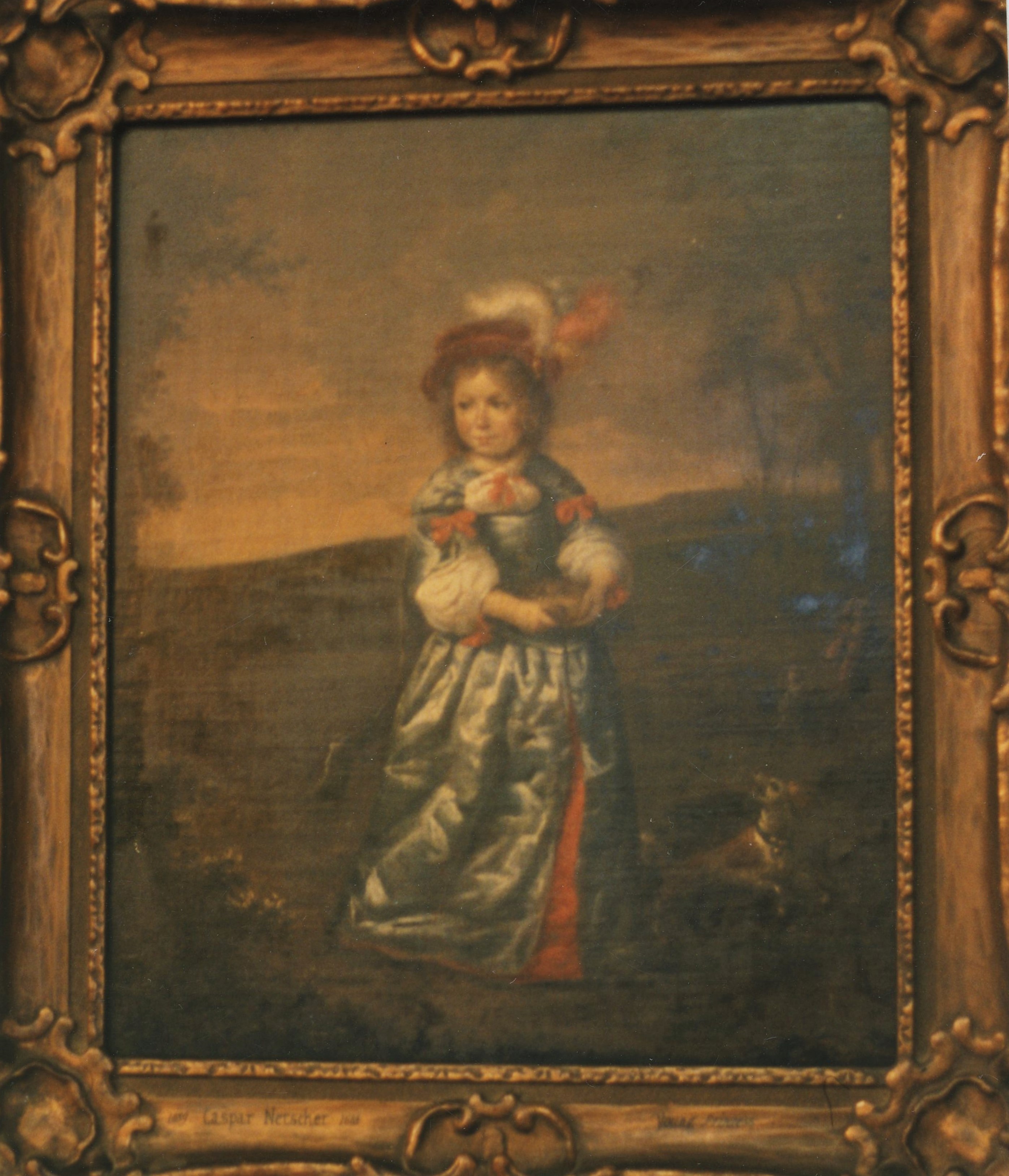 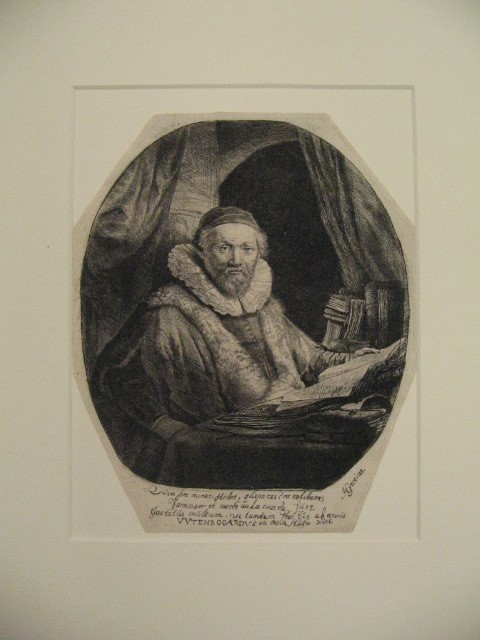 Jan Uytenbogaert, Preacher of the  Remonstrants 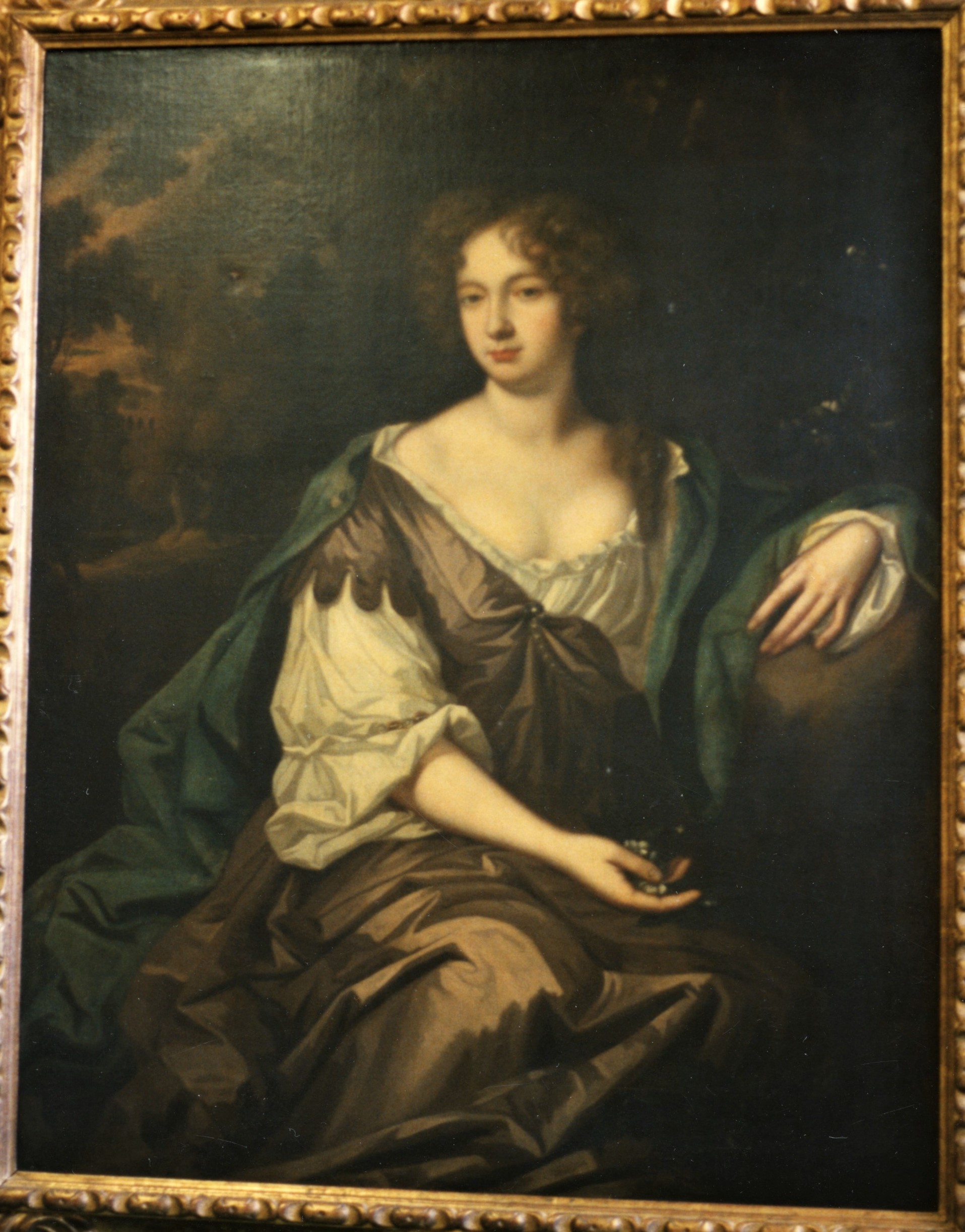 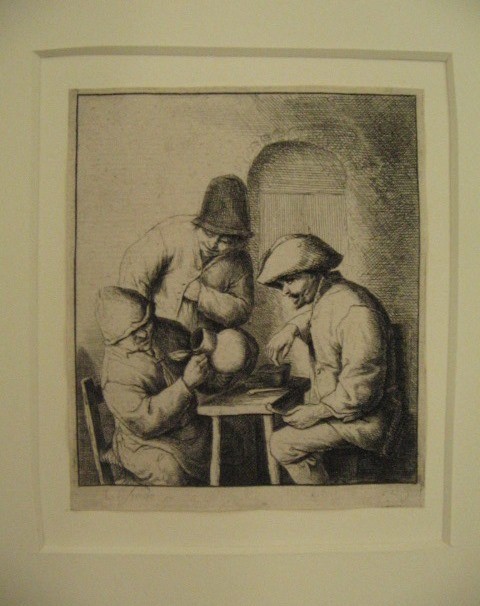 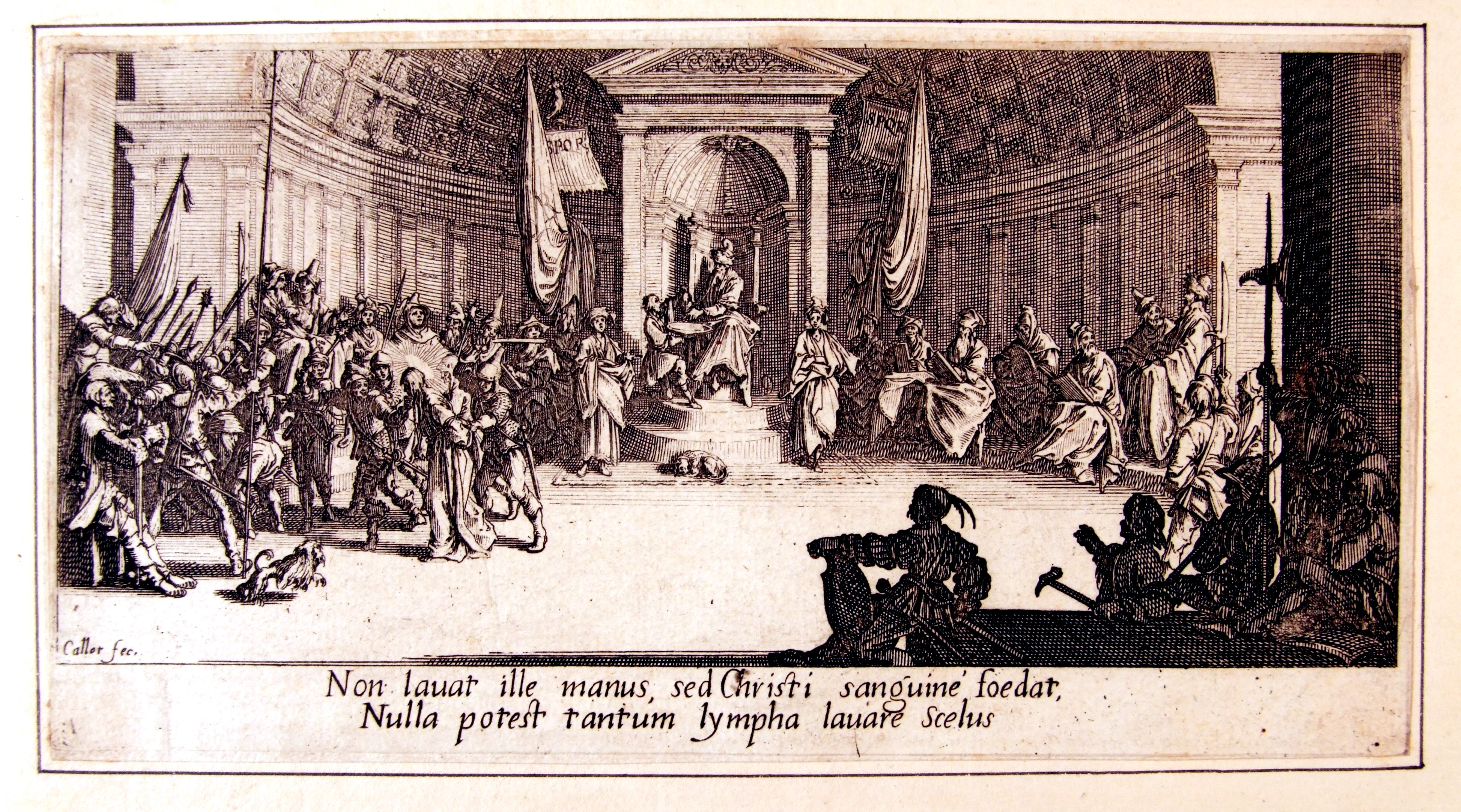 Christ before Pilate in the Large Passion