The invention of the European printing press during the 15th century greatly expanded access to books as well as art, facilitating the spread of Renaissance thinking and artworks. In Northern Europe, printing was extremely popular and made fine art accessible to an expanded art market. Printers such as Dürer accumulated great wealth and success within their lifetimes. The Knox College Art Collection has a strong collection of Renaissance prints. 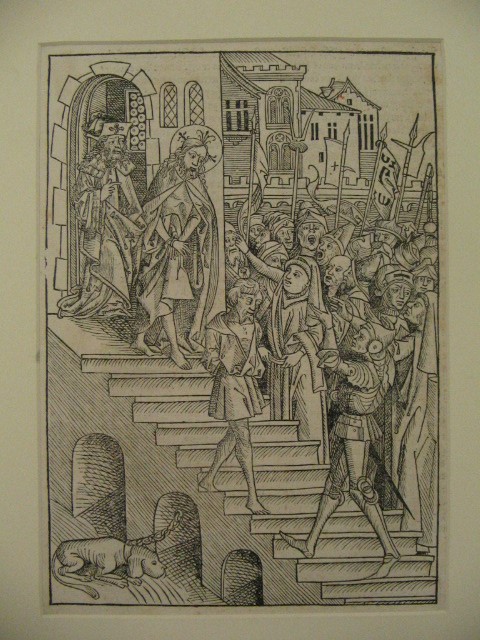 Christ Presented to the People

A renowned painter and printmaker, Wolgemut ran a major printing workshop in Nuremberg, Germany and trained Albrecht Dürer (see below) in woodcut. Although Wolgemut created a number of elaborately carved and painted altarpieces, he is most well-known for having produced the Nuremberg Chronicle (1493) a massive book illustrated with hand-colored woodcuts. This woodcut is an illustration from another important book   produced in his workshop, the Schatzbehalter der wahren Reichthümer des Heils. Both books were printed by Anton Koberger, the largest publisher in Germany at that time. This print depicts the dramatic biblical story of Christ’s trial before the Roman official Pontius Pilate, which led to his crucifixion. In keeping with the early Northern Renaissance style in Germany, the print reflects the continued use of such medieval elements as elongated bodies and a simplified treatment of details. Yet, it also shows a rudimentary exploration of naturalistic traits, such as perspective and a more extensive modeling of forms using crosshatching. 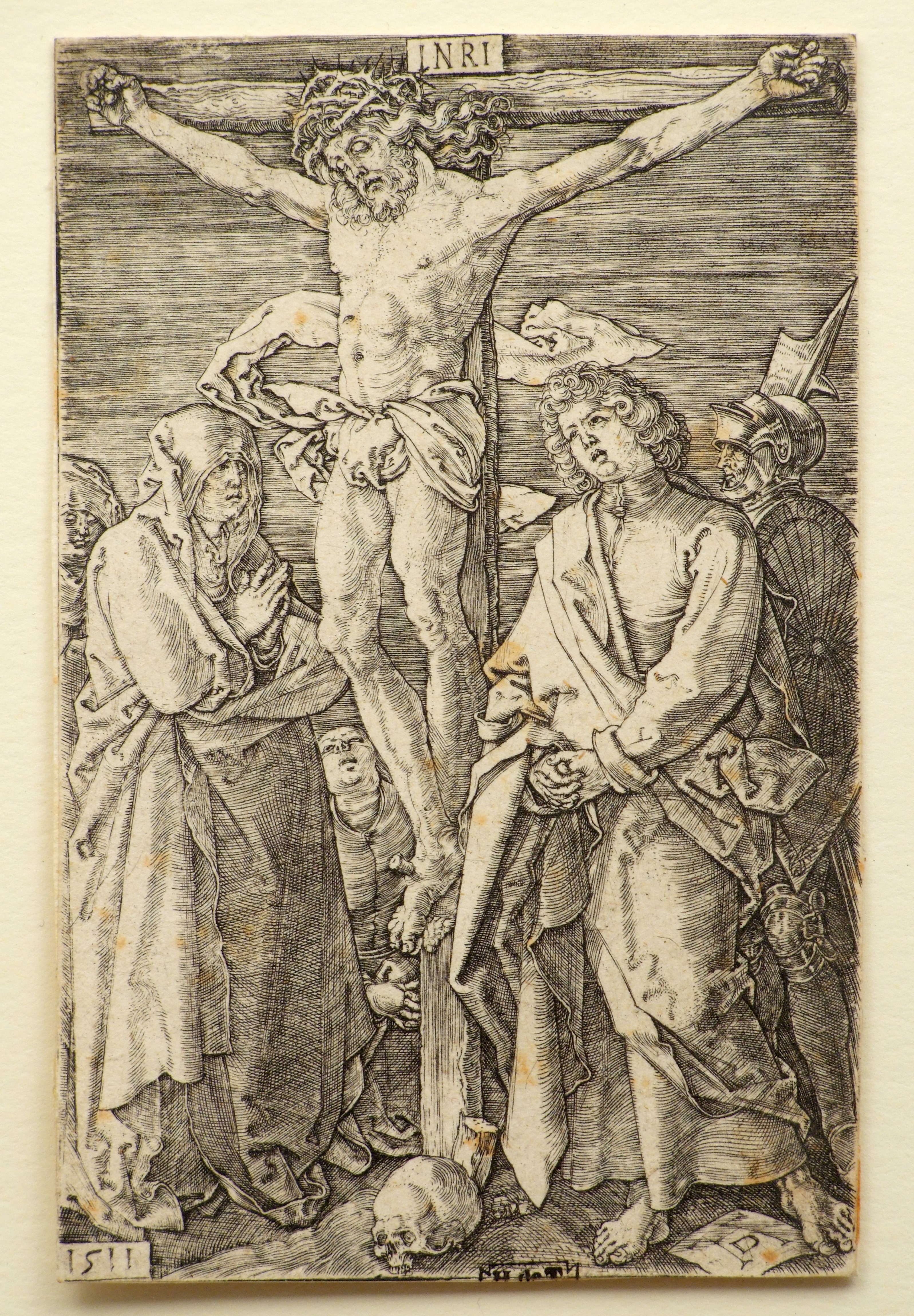 Crucifixion, from the Engraved Passion series

Dürer is regarded as the preeminent Northern Renaissance master, who hailed from Nuremburg, Germany. In 1486, he was trained in woodcut by Michael Wolgemut. During his career, he made two artistic sojourns to Italy and was the first Northern artist to become fully conversant with the revolutionary principles and humanist theories of classical Italian Renaissance art. Dürer was also one of the most significant and skilled figures in the history of printmaking, who gained fame for his intricate woodcuts and later advanced the artistic potential of engraving and etching. As can be seen in this engraving, he was extremely inventive in the diversity of lines to create striking, detailed effects of modeling and surface textures. This work also represents his expert knowledge of Renaissance principles of linear perspective and ideal bodily proportions. With the heavy, statuesque bearing of the figures, this print is a formal and restrained handling of the crucifixion theme. 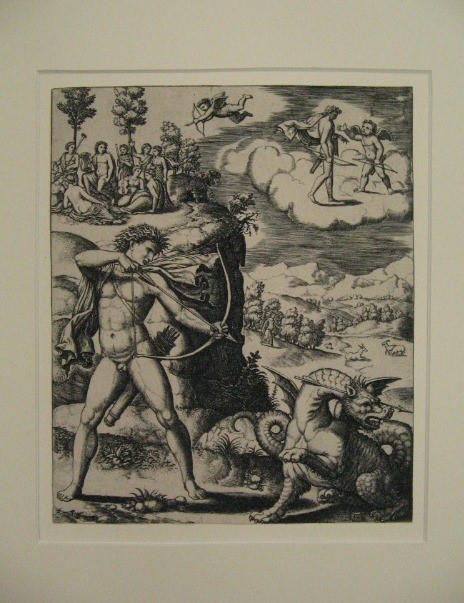 Although artists in Northern Europe pioneered printmaking as an art form in Europe, this knowledge did reach Italy as well. While the Italian Renaissance favored painting and sculpture, some artists such as Marcantonio Raimondi and his pupil, the anonymous Master of the Die, did use printmaking for original artworks as well as making easily reproducible print versions of original paintings. Prints allowed knowledge of artworks to travel and is responsible for the proliferation and merging of the Italian Renaissance style throughout Europe, perhaps most famously by Dürer. The Italian Renaissance style emphasized naturalism and classical beauty. This print by the Master of the Die (named for his signature of a die with the letter "B") demonstrates the Italian love for the heroic nude and symmetry as Apollo slays Python, divided by the border of the central cliff. 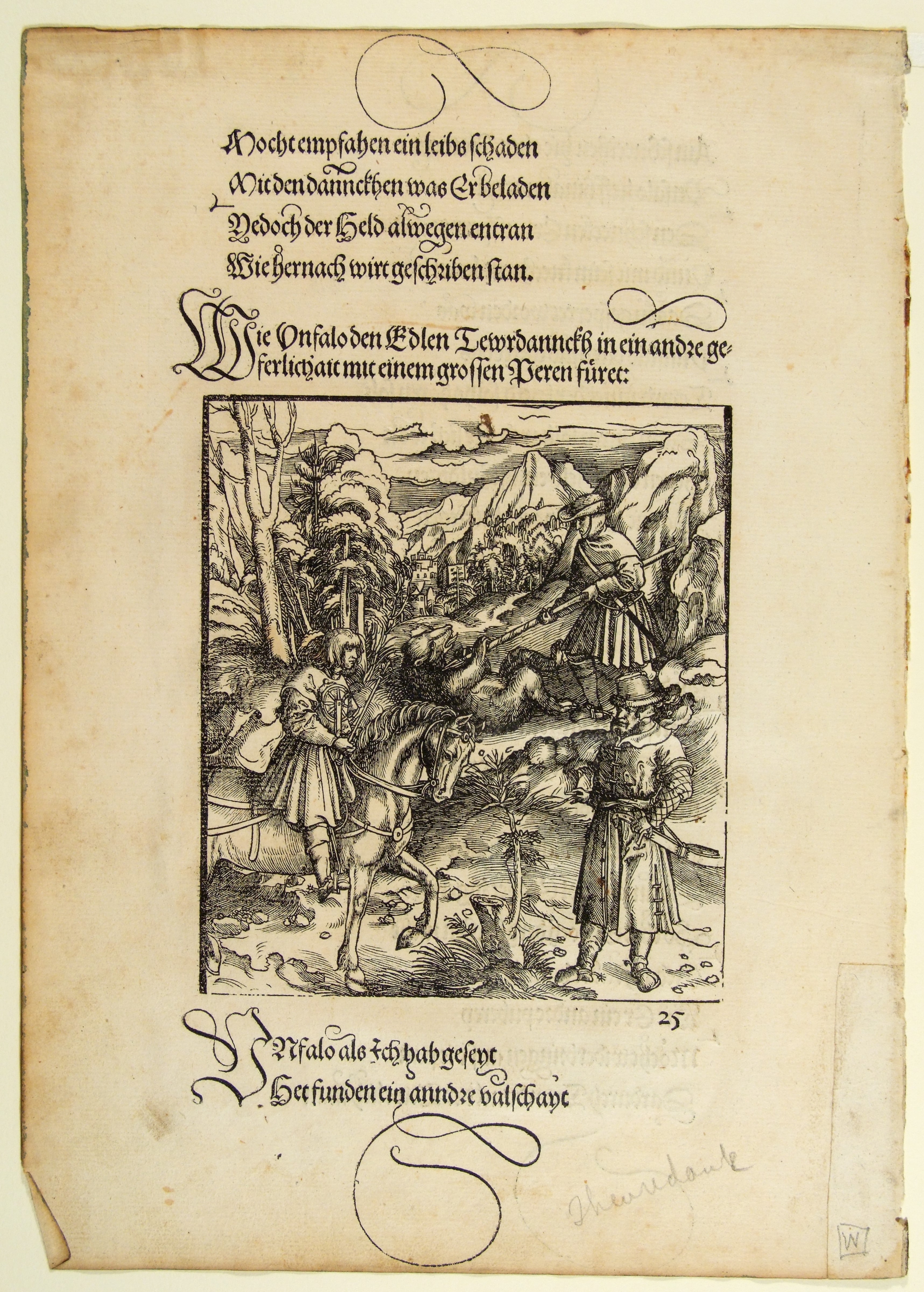 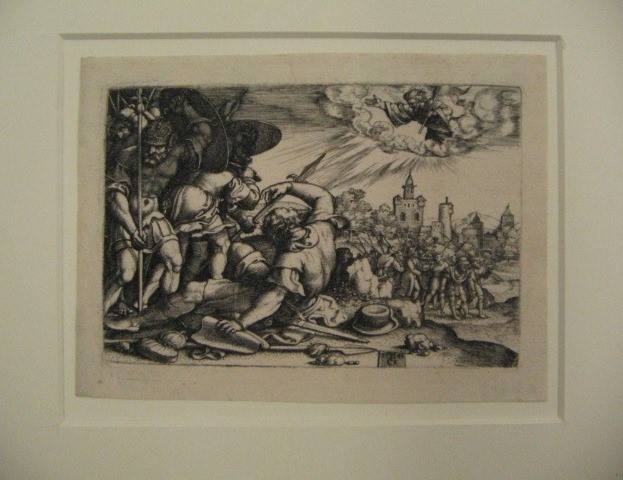 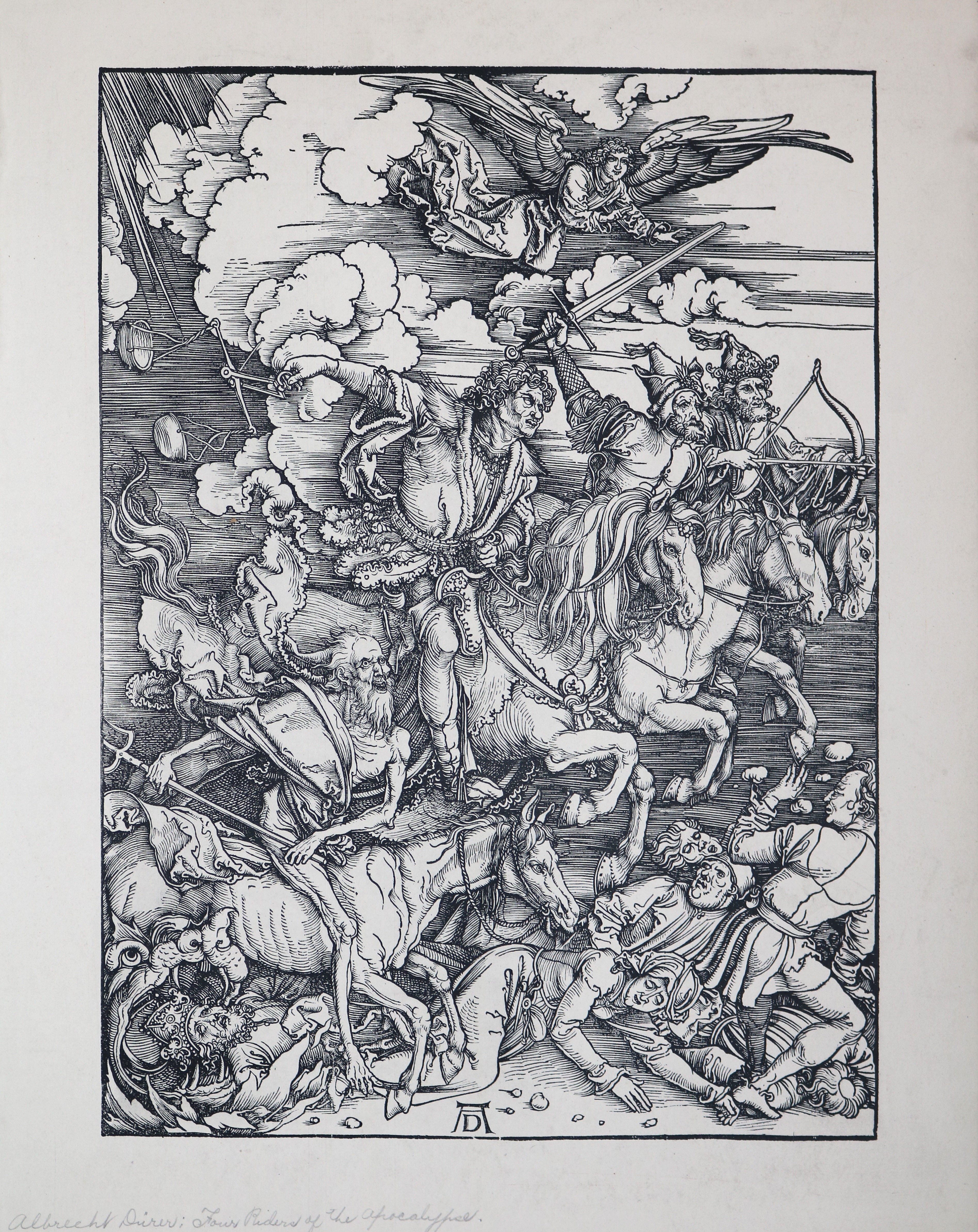 Four Riders of the Apocalypse 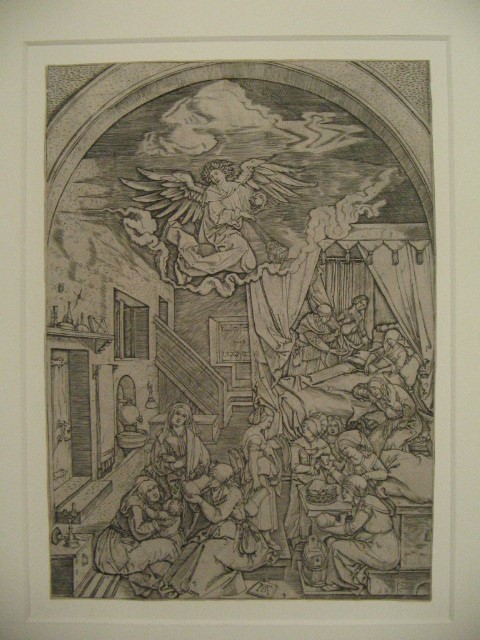 Birth of the Virgin (after Dürer's) 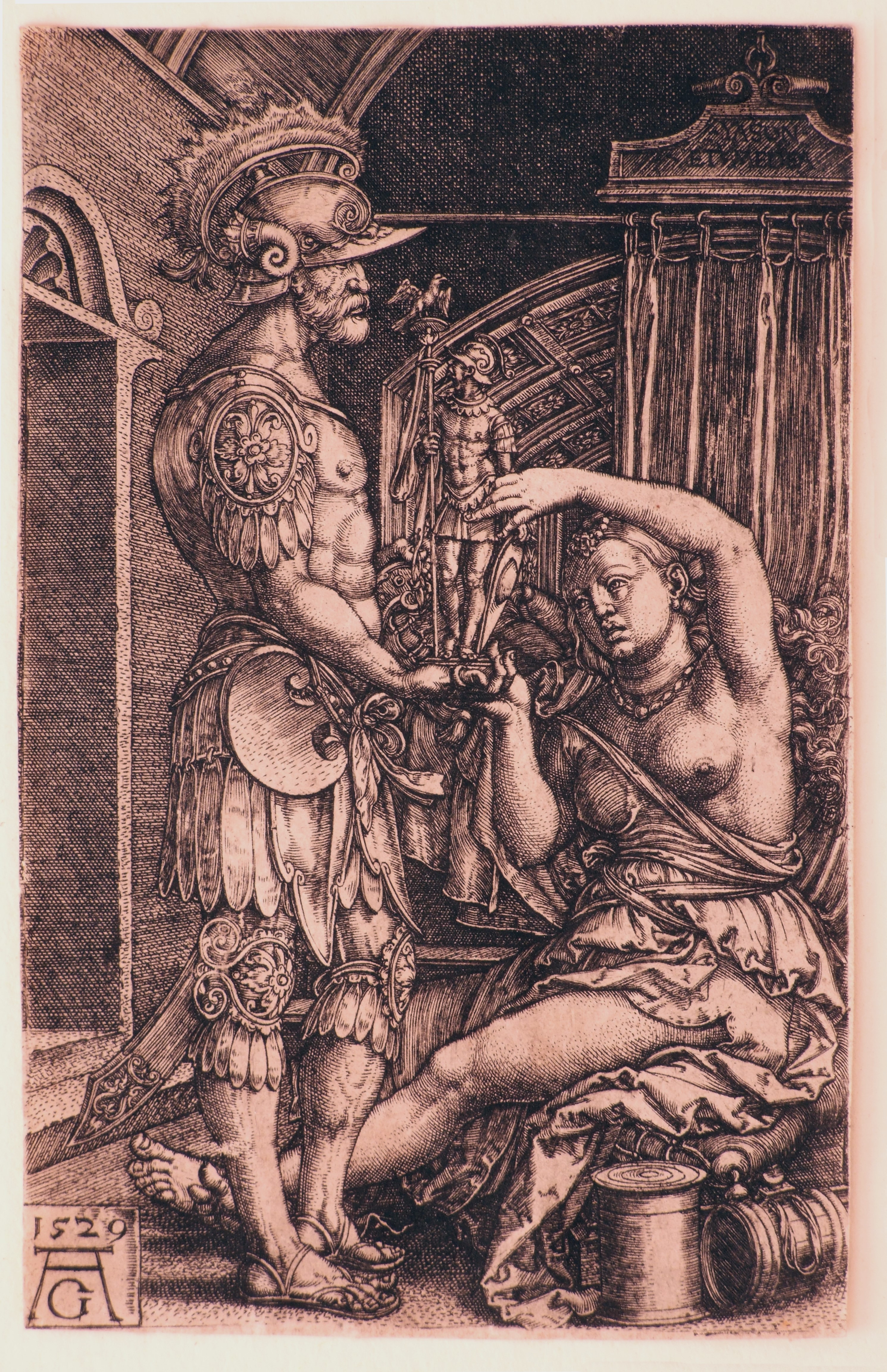 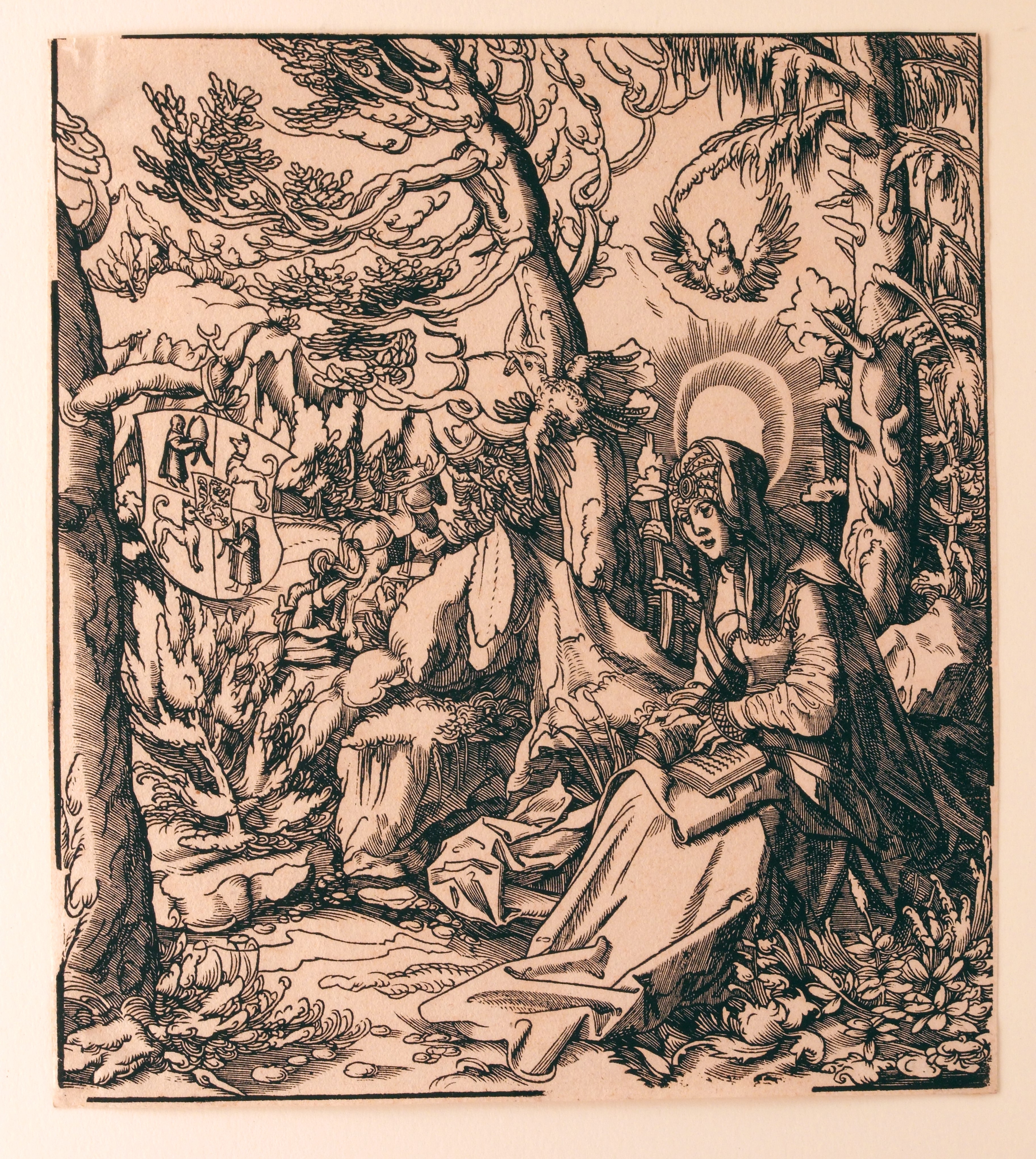 Saint in the Wilderness